Posted on October 28, 2014 by Admin in Gambling, Yggdrasil Tests the Waters 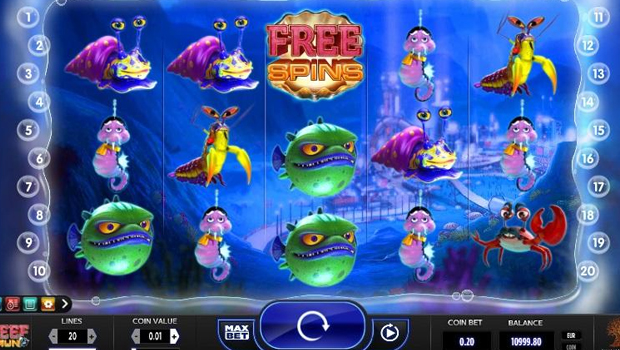 Yggdrasil Tests the Waters with its First 3D Video Slot

As time goes by, new things emerge in the world of gaming. Online casino games have continued to thrive and software provides have upped their efforts as they come up with new versions as well as stylistic animations, graphics as well as features to improve their games quality. New era has brought amazing games and the latest to hit the market is the Yggdrasil that has initiated a 3D game slot by the name Reef Run.

The slot game has been set in aquarium surrounding and encompasses a series of animated creatures that lives in the deep waters and are capable of winning a player an amazing 20,000 coins in every line! The existence of wonderful nature of the seabed, which is accompanied by attractive creatures such as the sea horses, octopi and crabs.

It has a colorful look that is made attractive by the underwater nature. It comes with much appealing 3D graphics. The moment a winning combination comes to being, symbols usually come to life. The game comes with five reels that are accompanied 20 paylines. Incase in an active line over three symbols are evident; the payouts are paid back by six different symbols. The game has amazing sound that gives the player an aquatic environment.

Free spins forms the main feature in this slot game. They are acquired once the Free Spin symbol halts along the screen. In this case, three symbols will give 10 free spins; four bring about 20 while five of them bring 60 fantastic free spins. There is yet emergence of another feature that comes the moment one is spinning the reels. The symbol levels the winning symbol, which results to the emergence of multipliers in x 1, x5, x10 as well as x20.

One time in the game, precisely during the free spin, more excitement comes to being, the background of the play screen reforms whereas on the sides, six characters are seen. These highlights the victors characters which comes hand in hand with their respective multipliers.

Yggdrasil has been on the fame with its amazing game release since it was formed. The firm claimed that this is their seventh game to be initiated since December last year. Reel Run video slot is the only 3D slot that has been initiated by the provider.

Log in to any casino and enjoy this wonderful slot.