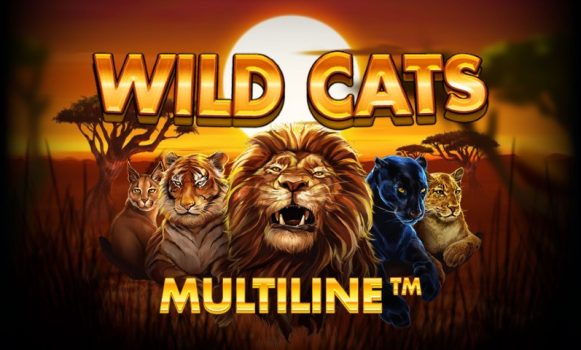 Red Tiger is one of the studios that have a license allowing them to be running Megaways and now in efforts to come up with their own alternatives in the casino playing they introduced Power reel series and the Multiline mechanic. In the same mood, Red Tiger announced the release of a 6-7 video slot on 25th July 2019 namely the Wild Cats Multiline. The game allows somewhat diversified gaming, giving options of either using Mobiles, Desktop or Tablet to gain access to the African Savannah slot.

Wild Cats Multiline is considerably a low bonus giver with minimal excitement to offer but instead, it balances using Freespin games to initiate symbol respins using the wild. Using a yellow color theme, this video slot is pretty much similar to others that were released before even though it goes down as a high variance game. On the reels, you will only notice five low paying card suit symbols and a savannah sunset backdrop with rippling waters, occasional bird flocks flying across the play screen and unaffected grass in the foreground.

While you may see rewarding caracals, panthers, leopards, and tigers the lion, still remains to be the slot’s wild that normally substitute for all the other symbols except the scatter and gives you 50 times your stake upon landing a wild line. When expanded, Wild Cards is a Multiline slot that is capable of producing 49 paylines or otherwise betways and allows reel spinning from €,£, or $ 0.1 up to 40.

Wild Cats has numerous symbols that are worth your watch, but try to keep your eye on the central wild symbol, which appears to be the lion. More precisely, when the legendary ‘cat’ hits it will remove a random symbol from all positions and another drop fills the void. In details, other symbols include (but not limited to):

Card suit symbols – often five of them and low-paying

Apart from watching the paylines change between 4, 9, 16, 25, 36 and 49, the main game has no other remarkable bonus features to benefit or long for. Hence, Royal Spins Features (Free) is the substitute perk that comes into play after simultaneously landing 3 or more symbols.

Other non-bonus features of the Wild Cats Multiline are the Avalanche and Scatter Symbols.

Unlike bonus offers, Wild Cats is a Freespins hub where the latter may result between 2 and 7 symbol rows.

Royal Free spins is another package that is capable of delivering hits when you have your chain-reaction respins moving.

*PS: as a result of Freespins round you may pocket up to 2000* the stake

Where to Play Wild Cats Multiline

Besides free-playing Wild Cats on various bookies, also do consider trying it out for real money on the following lobbies:

Wild Cats is relatively an average casino despite having a high variance and a promising RTP all possibly because of its Multiline functionality at the expense of Megaways that are offered by many other providers. Either it does not imply a fail since it could do better in the future especially after other brands adopt the Multiline.