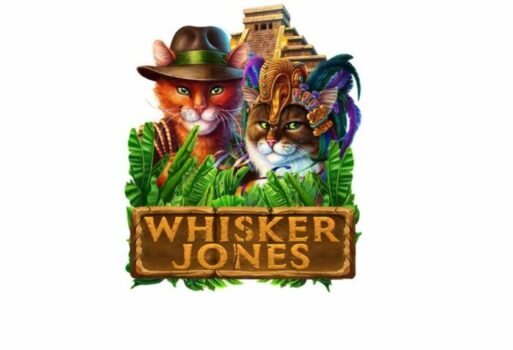 I love it when developers try out new theme ideas and that exactly what 1×2 Gaming is doing in Whisker Jones slot. Here, a cat performs the role of the Indiana Jones-like character which just so happens that he has a similar name as the game. Accompanied by two professors which are also cats, Whisker is going on an adventure in South America, in its wildernesses, searching for Aztec treasures.

Whisker Jones offers 5×3 reels with 10 paylines. Whisker Jones online slot can assist us with getting paid up to 1,500x the stake and there will likewise be a few cool features to try out such as scatters, free spins, wilds and multiplier wilds. A 96.10% RTP and a low-medium unpredictability, reveal to us that the game worth trying out.

1,500x the stake is the biggest prize that Whisker Jones can pay and given the bets which are available. That would involve winning mixes on all lines, just as multiplier wilds.

I enjoyed the presence of a fair RTP here, since at 96% it tells us that we will make more profit, as in other modern games.

The Priestess image marked a Wild logo, lets us know precisely what it can do for us. The image acts as a substitute, so it can replace missing images when appropriate, so the new mixes may form.

Another feature image, the Bonus will have various roles depending on the mode where you are getting it. In any case, only the third reel can get the Bonus image.

For the base game, this image will trigger a transformation of 0 to 6 images from the game area which will be changed into extra wilds.

During free spins, that same Bonus image is also a wild multiplier, so it can increase the value of wins that it forms for you.

You need to land the scatter images at least 3 times to get to the free spins. The outcome will be a feature with 8, 12 or 16 free spins. If the feature is retriggered, the same number of images will add 4, 6 or 8 additional rounds. As I have said earlier, the bonus image has an additional role as a wild multiplier when it lands on reel 3.

It is an Aztec themed title but it is not a standard game for this category. Instead of using a typical Indiana Jones like character, we are getting cats in all the main roles. Whisker Jones is the name of the legend and we see him in the top image. Some cats in the roles of professors, a cobra snake and four Royals make up the remaining regular images. Its feature images are the Pyramid Scatter, Priestess Wild and the Hat Bonus.

The design is nice, with animation style graphics of high quality.

Whisker Jones is a nice game, mostly for those looking for a new story and an interesting main character and not simply unique features. This one can pay well. It has has a few unique features that can have a good impact but nothing major. It is an appealing type of game, with average RTP, features and payouts.