Posted on November 28, 2014 by Admin in Tennis, Wheelchair tennis 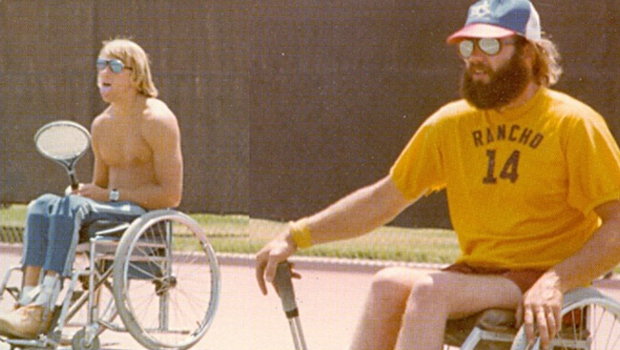 The former tennis player, Brad Parks, after becoming paralyzed in a skiing accident, has discovered that his tennis days are not over yet. He and his friend Jeff Minnebraker, who is also in a wheelchair, created something called wheelchair tennis, teaching it to youngers and making the rules and regulations.

Created in the California rehab center, the sport had simple beginnings. Now, 40 years later, it is a sport played worldwide, with tournaments and world-class athletes.

In 1976 the freestyle skier Brad Parks had suffered a hard accident in a competition, and that accident has left him paralyzed from the waist down. At that time, like many injured and disabled people, he played basketball as a part of the rehab, but one day he took the racquet and started hitting with his father.

He had played the tennis for the next month alone or his father, and then he needed to go to Los Amigos for reevaluation, where he met Jeff Minnebraker. He is the rehabilitation and recreational therapist in the Rancho Los Amigos, in Downey, and they started playing the sport together. This meeting was same as John Lennon meeting with Paul McCartney creating something really big.

The interesting fact about Jeff Minnebraker is that he had his own custom chair, and one day when he and Parks switched chairs, Parks was amazed of the speed of Jeff’s chair, and the way that it turned. He took a look at Jeff in his chair and with the high back and the pushing handles, he commented that he looks so ‘disabled’ and thought that must be how I look. He asked Jeff to make him a chair like his, but he refused, instead he taught him to make one for himself, and soon after that they started their company for producing wheelchairs for athletes named Quadra.

They soon started making tournaments, and more and more people were showing to the events. Parks along with David Kelly, David Saltz and Jum Worth created the National Foundation of Wheelchair Tennis. If Parker was the man with the plan, Jeff was the first engineer and architect, than we must give credit to Randy Snow, who has been the recruiter. He would inspire disabled people to play tennis and teach them to be good at it. Later he becomes the world No.1 wheelchair player with 10 U.S. Open singles under his name from 1981 to 1993. He died from heart attack at age of 50 and become the second wheelchair tennis player to be in the Tennis Hall of Fame apart from Parks.

There were several changings of the rules that Parks and Minnebraker made to the Wheelchair Tennis. None of these changes is major that the normal tennis, except that the ball can bounce twice off the ground instead of once, and they have introduced wheel fault instead of foot fault. Parks and Minnebraker made a professional sport out of recreation.