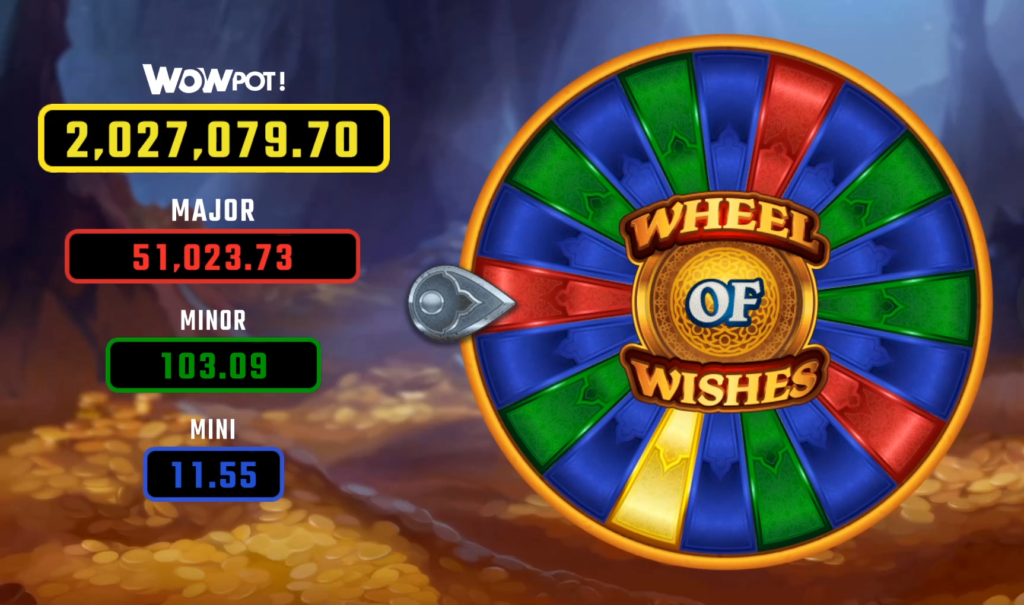 Set against the sands of Arabia, Wheel of Wishes combines stunning graphics with a dazzling soundtrack and incredible gameplay. Genie lamps and other mystical symbols guide players towards a cave of riches, wherein even the grandest of wishes can come true.

Stacked wilds race along the reels as players search for two or more wheel scatter symbols to unlock the coveted Power Spin, which transforms reels one and five into identical high-paying stacked symbols. A single giant symbol then forms across the centre reels, giving players the chance to land a full matching reel-set with huge win potential.

When a giant wheel symbol lands in the 3×3 centre grid during a Power Spin, players are granted entrance to the Wheel of Wishes Jackpot Bonus, which guarantees a chance to win one of the four jackpots: Mini, Minor, Major, or the newly reformed WowPot with its €2 million* starting seed.

Players can choose to activate Power Mode via a side bet, and permanently enable Power Spins, increasing the likelihood of entering the Wheel of Wishes Jackpot Bonus and the chance to take home the WowPot jackpot.

Wheel of Wishes joins Microgaming’s record-breaking progressive jackpot network, which has awarded more than €1.1 billion in jackpot payouts and created 79 millionaires since its inception.

Wonders and riches await in Wheel of Wishes, available exclusively for Microgaming operators from Tuesday 11 February.

James Buchanan, Director of Global Operations at Microgaming, comments: “We are delighted to present Alchemy Gaming’s debut title, and the first in a new wave of games to join Microgaming’s progressive jackpot network this year. The addition of Wheel of Wishes with its revamped WowPot jackpot is sure to set new records, while the introduction of the Power Spins and Power Mode make for a fantastic gameplay experience. We are pleased to announce that the game’s first Major progressive jackpot win has already been hit during an early release period, with one player winning €131,574.55 and total payouts across all four jackpots exceeding €1.2 million.”

Rory Harpur, Head of Alchemy Gaming, adds: “Wheel of Wishes combines superb graphics with intuitive game mechanics. The title’s Power Mode feature transforms the reels into a permanent Power Spin, creating an enhanced opportunity to enter the Jackpot Bonus Wheel and ultimately claim the WowPot jackpot! We are incredibly excited for the wider launch of our debut game with Microgaming and can’t wait for players to take a spin on Wheel of Wishes.”

* EUR used for display purposes only. The amount shown on the progressive ticker reflects the currency in which the winner has played the game.

Launched in 2019, Alchemy Gaming is a new independent game development studio that supplies exclusive online gaming content to Microgaming. Founded by a team of gaming alchemists with a wealth of experience in the industry, Alchemy Gaming strive to create the gold standard in gaming experiences.