Posted on January 16, 2015 by Admin in Football, West Hamm vs. Everton 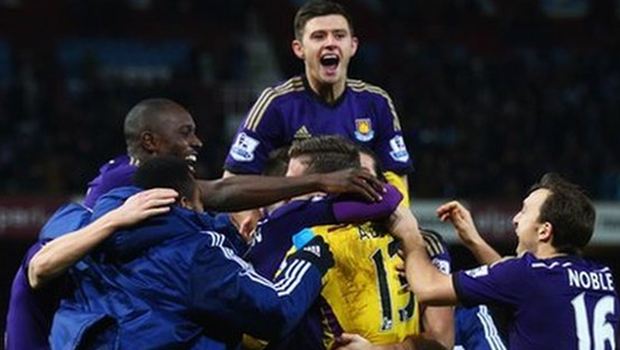 West Hamm vs. Everton in the FA Cup

In the game that was played on the West Ham United’s stadium where the hosts West Ham kindly greeted Everton with whom they played 1:1 in the first match of the third round of the FA Cup. The tension and atmosphere in the park were awesome, and that’s the main thing that motivated the players on the pitch to play the football like we sow on Tuesday night. There were many actions including 14 goals including the penalties and blazes everywhere.

Players on the pitch were following:

Everton got in this duel with 15 matches without losing to West Ham in any competition, but things were about to change. The game went good for the hosts with Ener Valencia collection the pass that Andy Carroll gave to him and turned the chance into goal. Joel Robles, the Everton keeper, had no chance of catching the ball. Things went ever better when Aiden McGeady was sent off in the 56th minute after receiving his second yellow card.

In the 82st minute there was hope for Everton’s side when Mirallas scored a brilliant goal from free kick. Full time at the Upton Park and no winner to proceed through the third round of the FA Cup, as that will have to be decided by extra time. Extra time for extra drama as RamadelLukaku found the back of the net with a pass from Mirallas, and the whole stadium thought that this was it for their players, but as soon as Charlton Cole came in in 111 minute he scored in the 113 to make it 2:2 in this match and 3:3 in overall score, again not having a winner. It was the end of the extra time, and it was time for penalties.

Miralas and Noble gave their sides the 1st goal, but as soon as Naismith shot the ball, Adrian, West Ham United goalkeeper, knew where the ball was going and threw himself there, catching it, allowing Nolan to give advantage to West Ham, and so he did in the second penalty. Lukalu equalized soon before Carrol got the advantage on West Ham United’s side again. It was 3:2 at this point. Next round it was up to the left backs to make their shots. Baines and Cresswell both put goals in their team’s graphs and went back in the middle with the result of 4:3. It was Olviedo who went next for the ball, and if he missed it, it was game over, but he didn’t. He scored to give Downing the opportunity to win it for his team but he missed it. Now it was all square again. It went on for several more shots before Goalkeepers shot and Everton’s goalkeeper missed while West Ham’s Adrian gave the goal that advanced them through to the fourth round of the FA Cup.