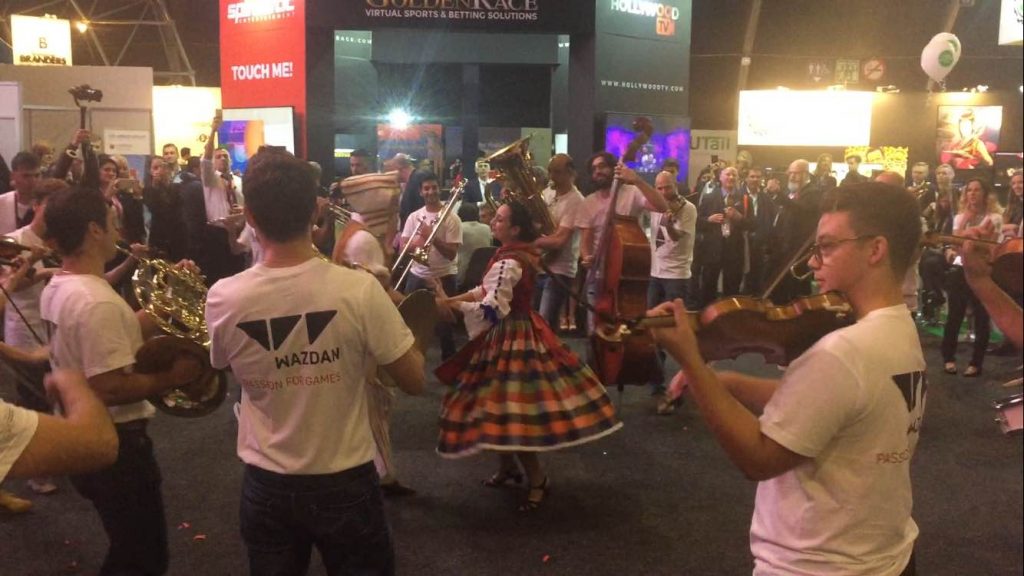 The world has seen Crazy Uptown Funk flash mobs, Thriller flash mobs, and Frozen Grand Central flash mobs. But have you ever seen a National Orchestra flash mob? For the launch of SiGMA, one of Europe’s biggest iGaming events, Wazdan staged a spectacular flash mob with the Malta Philharmonic Orchestra to call attention to Maltese culture for City of Culture Valletta 2018 and Wazdan’s own creativity as a major games producer with products covering slots, table games and video poker as well as launching the world’s-first real- time in-game ‘Volatility Level Control’.

More than 60 people were involved in the Wazdan flash mob choreographed to the rhythm of Maltese composer Charles Camilleri’s “Malta Suite Waltz,” and inviting the crowd to join the dance and the wider move towards European City of Culture 2018 in Malta. The performance was choreographed and produced by Marcus Ward at Ogilvy Malta.

Wazdan are present with their stand at B138 showcasing the games that are building real traffic, displaying features that include a world-first real-time in-game ‘Volatility Level control’ and seeking partnership opportunities with operators looking to enhance their content offering. Wazdan’s popular portfolio includes titles such as Magic Target Deluxe, Valhalla and Wild Guns. Delegates will also be able to see demos of upcoming titles Los Muertos, Mayan Ritual and Captain Flynt, among others.

Visitors to stand B138 could win one of three wonderful pre-release bottles of Malta’s most exclusive malt whisky Penderyn, matured in Maltese wine casks, again demonstrating the range of craft skills available in Malta.

Jeremy Fall, Head of Marketing at Wazdan said: “David Mann our Sales Manager had promised a surprise for all the delegates at SiGMA, we are delighted with the response to our flash mob and hope it helps get more publicity for V18 around the world. Delegates can drop into our stand and have a chance to win one of the three wonderful bottles of Limited Edition whisky. It’s a unique “Maltese” whisky and very exclusive. We look forward to welcoming visitors to our stand B138 and to showcasing our games and explaining what they can deliver for operators.”

For further information visit www.wazdan.com or email: dm@wazdan.com or set up a meeting directly by calling David Mann on +356 9907 3458.

Wazdan have stunned the igaming community at SiGMA with a flash mob performance by the Malta Philharmonic Orchestra.

Wazdan is a rapidly growing online games provider for many casinos and other key partners. With a portfolio of over 100 world- class games for instant play and, most importantly, smartphones (iOS and Android). Wazdan complies with MGA regulations as well as Curacao licensing, and the RNG that’s used in their games is actually certified by NMi, which means that all Wazdan software is reliable, fair and secure.