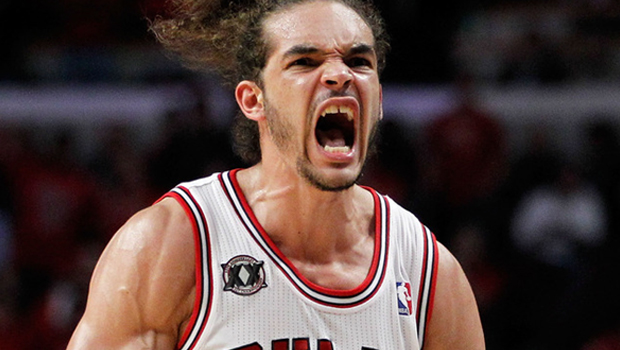 Noah managed to score only two points, three rebounds and two assists in the little time that he played in the first half before was injured just before the end of the second quarter. It was Noah out of the field and Taj Gibson in game as the second half of the game started and got going, to eventually end in Washington Wizards win over the Chicago Bulls.

Noah’s right ankle will be tested and reexamined on Thursday, hoping that he won’t miss any more games. It’s the Boston Celtics who are going to be the Chicago Bulls’ next obstacle in the normal games of the NBA.

Derrick rose commented that he feels bad for not having Jo Noah at the pitch with him. He said that it’s bad to lose a player like Noah when his power and hid leadership are as big as he is. It will most definitely have an impact on the team and help Boston Celtics have greater chance to win the game. There is Pau Gasol that is the latest reinforcement in the team and his height can do difference and can somehow fill the gap of Noah missing.

When Noah didn’t make the return to the pitch in the second half it was obvious that the game pace has changed. Pau Gasol commented that the difference can be felt from miles, as they were the team who controlled the game and the lead in the first half when Noah was on the pitch, but when he wasn’t in the second they got into themselves, withdrew and started losing the ball more often, not having the same chances that they had under the racquet and lost many balls due to jumps after misses to Wizards.

It is one of the many injuries that Noah has gone through in the last several seasons. Since the operation on his left knee done in May last year, he has failed to get back to his game as he previously was. Pau Gasol cannot comment on such thing but the rest of his teammates like Rose can most definitely explain how he was before the operation, and they haven’t used any bad word to explain Noah.

Let’s wish Noah a quick recovery and more luck with injuries as soon as he hits the pitch again.
Jackpot bet online is the site where you can see the latest info and news about sports and gambling. Don’t hesitate to throw buck or two in the betting application as you may be one of the lucky winners of the jackpot.