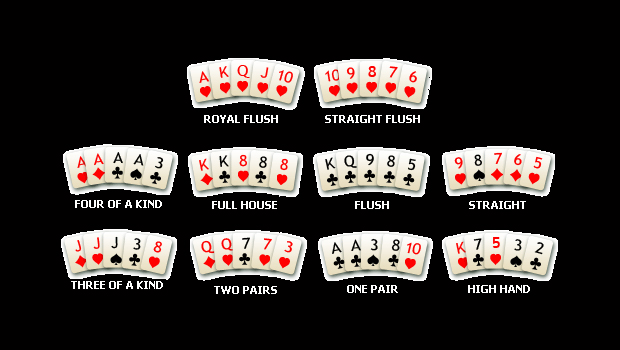 Besides not knowing whether somebody is really bluffing or not, the most confounding aspect of poker is not being able to determine which hand has the highest rank, especially when none of the players can agree. That’s why at (insert domain name) we have made a point in ridding poker games of confusion and uncertainty.

We know how to play poker, and we know how to play it well! The following content lists all the possible poker hands from highest to lowest rank. Feel free to print it from your computer, so that it is readily available when you are playing a hand of poker. That way, you will always be certain of who gets to take home the pot!

This hand is of any consecutively sequenced cards of the same suit.

a hand with a 10 of Hearts, 10 of Diamonds, 10 of Clubs, 10 of Spades and any other odd card. This is the second greatest poker hand. If there is more than one four of a kind in the same game, the hand with the highest four card rank wins.

It does not matter what suit the cards are, for the suit has no relevance in determining rank. A tie between two full house poker hands is broken by the rank of the three pair since there can never be two three pairs of the same rank. The higher three of a kind rank wins the pot. The rank of the two pair makes no difference to the value of the hand.

Like the flush if the cards were of the same suit (and in proper sequence) then it would be a straight flush. One thing to keep in mind is that straights cannot wrap around the deck. In other words, a Jack, Queen, King, Ace, 2 is not a straight because the hand wraps around by going from Ace to 2. A tie between two straights is broken by the highest end card.

Being that it is possible for two straights to have the same end card rank, the pot is split if such is the case.

Three of Kind: hand with a 9 of Hearts, 9 of Spades, 9 of Diamonds, and two odd cards is a three of a kind

Two Pair: A poker hand with two cards of the same rank, another pair of cards of equal rank and any unmatched fifth card.

A hand with a Jack of Spades, Jack of Clubs, 3 of Hearts, 3 of Clubs and one unmatched card is a two pair. The higher card value of a two pair determines the winner if there is more than one two pair in a game. If the higher pair is equal between hands, then the higher rank of the other pair is used to break the tie. If that pair is equal in rank as well, then the highest of the unmatched fifth cards is used to determine a winner.

High Card: When a poker hand contains no pairs, and is not a straight or a flush, its relative value is equated by the highest ranking card.