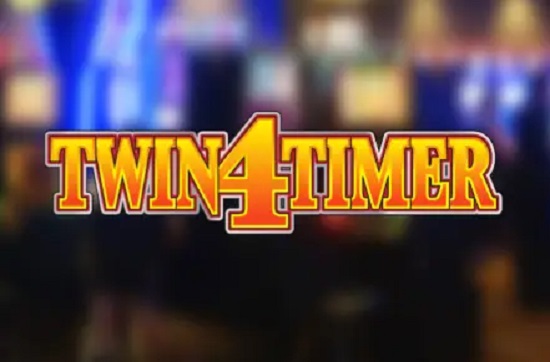 Twin4Timer is Stakelogic’s most recent slot machine, and it follows in the footsteps of Hold4Timer, a similar release. For this new game, they’ve preserved the traditional motif and the system of many sets of reels in the same game area. There is a difference between them because they switched from sets of three to sets of four reels.

There will be 4 to 7 active reels, depending on how many lines are active (10 to 25 possible). This is far from tempting at first, with an RTP of 95% and peak rewards of up to 165.6x the bet. Even if the only features are multiplier wilds, the odd gameplay and vintage style may pique the interest of some players.

The smallest stake to spin the reels is $0.40, but that only gives you one set of four reels. You add $0.20 for each additional reel and the 5 additional lines that become active, so the minimum wager on all 7 reels is $1. With all reels activated, you can wager up to $500 on this slot.

The Super Stake is an additional stake that doubles the amount you’re betting, allowing you to wager up to $1,000. It adds multiplier wilds to the game, giving you a better chance of triggering big wins. Only when all 7 reels are active can you activate Super Stake.

Twin4Timer isn’t the most exciting slot machine around, with prizes of up to 165.6x the bet. One possible explanation is the usage of a 95 percent RTP, which is far lower than what I’d expect in a recent release.

Features of the Twin4Timer Slot

As I previously stated, this is a 7-reel slot, but you only make winning combos on four of them (3 symbol combinations are used, on reels 1-3 and 2-4). The initial four sets of reels are used for the first 10 lines, and as you activate further reels, new gaming regions of three reels and five additional lines appear. The player activates reels 3-5, 4-6, and then 5-7.

When you activate the Super Stake option, the Multiplier Wild function becomes available. This symbol can appear on the second, fourth, and sixth reels. They use multipliers ranging from 2 to 5 times.

There will also be Double Symbols, which will include a fruit as well as a logo or a money bag. To win an unique prize, get three of these special symbols on a line. Otherwise, they pay like conventional fruit symbols if they’re coupled with them.

It’s a bigger gaming area than you’re used to, but the exciting part ends there. Aside from that, it’s a classic fruit motif with a variety of symbols that belong in the twentieth century, not 2022. The quality is as awful as you’d expect, but it appears to be on purpose, since they appear to be going for a retro vibe.

Oranges, plums, pears, and lemons are among the low-paying symbols in Twin4Timer, which are followed by medium-paying raspberries, Sevens, watermelons, and crowns. The Money Bag and the Stakelogic logo are the most prominent icons. If you employ the Super Stake, you can get a multiplier wild.

For some gamers, Twin4Timer should be an intriguing release, primarily because to the way it plays. Most players will stay away from it because of the modest top jackpot and low RTP.