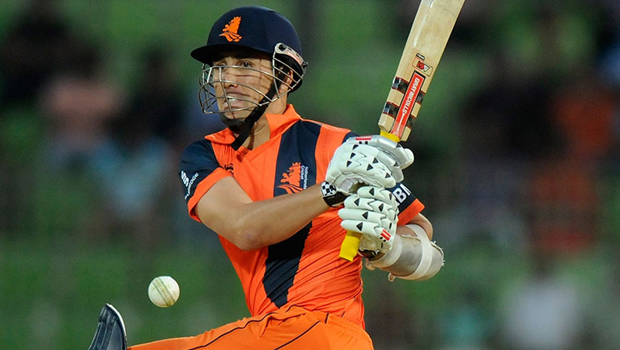 Tom Cooper finished as the second-highest run-getter in the 2014 World T20, but has not played an international game for Netherlands since

Batsman Tom Cooper has been added to the Netherlands squad for the the World T20 in India, which starts from March 8. Cooper, who last played an international match for Netherlands in 2014 during the previous World T20, replaced 18-year old Sikander Zulfiqar who had made his T20I debut against UAE earlier this month. Zulfiqar, however, will be part of the squad as a reserve player to gain exposure at the international level.

Cooper brings with him the experience of 92 T20s, having recently played for Melbourne Renegades in the Big Bash League. Cooper had also turned in impressive performances in the 2014 World T20 in Bangladesh, tallying 231 runs in seven matches at an average of 57.75 and strike rate of 137.50. He eventually finished as the second-highest run-getter in the tournament, but hasn’t played for Netherlands since then.

In the 1st interview that he gave after being announced and presented as an official member of the Netherlands squad, Tom Cooper says that he is pretty excited that he finally has the chance to play for something that is better than money, and that the national call came in the best time for him. He is physically and mentally ready for the challenge, and promised to do his best in representing his country colors on the Cricket t20 world cup. A big thanks to his family for his support were the highlighted words at the end of the interview with Tom.

Cooper had not been available for selection at the moment of the ICC deadline, but the squads can be altered up to February 29, and even after that in case of injuries. Anton Roux, the coach, welcomed back Cooper’s “experience”, as did Chairman of Selectors Jeroen Smits.

“Tom’s availability certainly adds some more spice to our team,” Roux said. “His Dutch cricket family will welcome him back with open arms, and are looking forward to having massive fun playing together with the men in Orange.”

“Tom Cooper was part of the hugely successful 2014 World T20 team that progressed to the Super 10 phase as only Associate Member nation, so the current team will certainly benefit from Cooper’s inclusion and experience,” Smits said.

Netherlands are placed in Group A of the first round with Bangladesh, Oman, and Ireland and will play one match with each team, in Dharamsala. Their tournament opener is against Bangladesh on March 9. Only if they finish on top of the group will they move on to the main tournament.