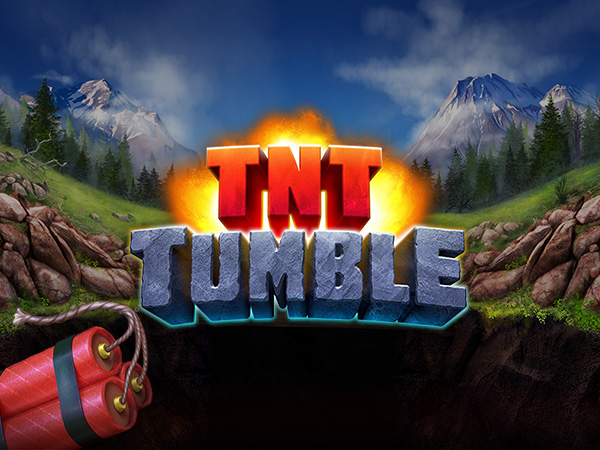 Ever wished to get your way into virtual bedrock for an opportunity to hit paydirt, paying up to €10,000,000? With TNT Tumble Dream Drop of Relax Gaming, the chance is here. It happens to be an upgrade of an earlier game, modified to secure a place in Relax Gaming’s Dream Drop jackpot network. Also giving five progressive jackpots, TNT Tumble Dream Drop comes with free spins with possible winning multipliers drilling wilds and TNT blocks.

As with most Dream Drop game conversions, little change has been seen, including jackpots and statistical shakeups. The main slot area view is as majestic as before, where gamers engage in TNT Tumble Dream Drop in an alpine area with mountains, trees, grassy meadows, and a foggy clouded sky. A mining contraption in the center of the display bears a five-reel, seven-row game panel.

If you hit the spin key, it drops four active icon rows and three rows of dark stone blocks consisting of 0 to 3 bundles of TNT. The objective of non-jackpot base play is to spoil all dark stone blocks to access free spins for an additional round.

Stone blocks’ destruction occurs once there is a win next to them.

Soon after paying out, a win is taken off the panel, and the rest new icons drop downwards to plug the spaces.

In case new wins are formed out of the cascade, this process replays again.

This system plays on an RTP value of 94%, and 12% of that moves to jackpots. It falls in the category of highly volatile games and is accessible from any device. The game offer bets of 20p/c to 100 Euros for every spin.The higher the stake, the more excellent the opportunity to activate jackpot wins.

The Wild drill icons are helpful in TNT Tumble Dream Drop. Unlike typical awards, the wilds do not face destruction once utilized in a combo till they drop to the lowest row and are included in an achievement. Per the paytable, wilds will likely stack in sections on columns and pay 50 times the stake for 7 of a kind. So, once the winning combos destroy the TNT blocks, they burst and destroy any remaining dark stone blocks in their rows.

As per our earlier statement, once all dark stone blocks see destruction, six free rounds get awarded in the main play. Gamers select what type of round they want.

The special stone blocks have multipliers of x1, x2, or x3, increasing into a global multiplier once they are destroyed. That makes the most volatile choice.

Extra Spins – Once destroyed, the unique stone blocks pay 1, 2, 3, 5 or 10 additional free rounds. This happens to be a medium volatile.

One significant distinction between the base and additional mode is that lower rows don’t reconfigure between free rounds. Therefore gamers can chip at them.

Depending on the chosen round type, every stone row has either TNT, a multiplier, or additional free rotation. Gamers scale deeper in the mine while stone rows get destroyed, and for each third row of the stone blocks spoilt, +2 free rounds are paid.

During any base game rotation, the Dream Drop grid can reveal gold, showing a Jackpot Spin has been awarded. The slot panel is concealed in stone blocks having TNT on every row. Those rows burst one after another, and once all of them are destroyed, if DD icons are uncovered five times, gamers go to the (Dream Drop Bonus).

Dream Drop Bonus slot comes with five reels, 1 for every jackpot award. The sizes for every reel are two for Rapid and Midi, three for Maxi, four for Major, and five for Mega. Blocks or DD icons are the only ones that can land on reels. Once a rotation completes, blocks are taken away, allowing DD icons to drop to the lowest level of spins. Cycles continue until one revolution is loaded with DD icons, paying its subsequent jackpot.

Each jackpot happens to be progressive, owning start values worth €1, €5, €100, €25,000, and €500,000 for Rapid, Midi, Maxi, Major, and Mega, in that order. The two biggest jackpots are to drop before attaining certain thresholds. The Mega increases its point up to €10 million, where it dwells from then onwards.

One danger of hanging out in mountainous places is the avalanches, which, once activated, roll in an unstoppable path. The same sense is beginning to scale over Relax Gaming’s Dream Drop concentration. Seems like no game from the Dream Drop conversion procedure is safe; that is happening at a prodigious speed. The studio held on to the idea of moving to races with it.

There may not be many participants complaining, especially those who opt for jackpot games.

The challenging part could be which Dream Drop game to go for.

The interesting thing about TNT Tumble is that it is neither a cluster pay game nor a pay line game.

It performs its own thing that could be unique once it lands a lucrative vein of valuable ore. That usually implies that stacks of wild icons are making their paths via icons, uniting a series of wins. It could be better if several wild stacks haul their way to the panel’s bottom. Together with the cash awards available once this takes place, the muscular way bores slam downwards, the stone blocks get destroyed, and TNT bursts can be very satisfying. The bonus play is potentially more, while non-jackpot success of circa 10,000 times the stake is on for grabs.

Therefore, if bashing a way via rock, for the opportunity of probably what can be massive feels tempting, TNT Tumble Dream Drop could most probably be your ideal selection. Resembling actual mining, not every swing of a pickaxe will reveal paydirt. However, the opportunity is available for jackpot players to try to scratch their itch.