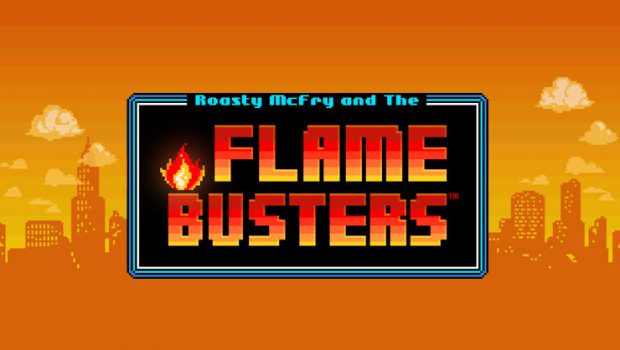 Roasty McFry and the Flame Busters is Thunderkick’s new slot machine. This superb title launched on May 17, 2017 includes fun features and stacked symbols.

The prestigious Thunderkick software provider gives players the opportunity to put themselves in the shoes of a firefighter and extinguish the burning reels of the Roasty McFry slot machine and the Flame Busters that he unveiled only a few days. This developer is relatively new to the market given that he has embarked on the world of online betting in 2012. He is also specialized in the design of absolutely fascinating 3D titles, and his slot machine Luchadora released in April 2017 is a good example. This time, Thunderkick decided to surprise all his fans with his latest production that has a retro design with symbols devoid of frills. However, this does not alter the entertaining and lucrative character of this game.

With the Roasty McFry and the Flame Busters slot machine that has 5 reels, 3 rows and 243 ways to win, Thunderkick has come out of the box and decided to offer players a Unusual theme. Here, the Swedish developer invites casino title enthusiasts to join brave firefighters to save the occupants of a building on fire. The creativity of the supplier was not limited to the design of the slot machine, judging by the symbols displayed on the screen. Among them, there are pieces of different colors, a strange goat, a robot, a one-eyed man, a magician and a fireman who represents the most lucrative icon.

To win prizes on this game, players must obtain a block consisting of at least 3 identical symbols from left to right and starting from roll 1. In order to assist bettors, the developer has incorporated to this production some interesting features, including a joker represented by the icon “W”. The latter has the capacity to substitute for all the other elements present on the rolls outside the dispersion symbol. The latter is illustrated by an alarm and can allow you to activate a bonus game in which you can win up to 20 free spins. In addition, there is a mystery symbol and many other features that will be very useful during sessions. All the conditions are there to help you win huge gains on this slot machine.

In addition to all the great features available on this game, it offers an interesting redistribution rate of 96.1%, which means it is a rather lucrative title. If you want to play it for real money, join today one of the casinos powered by Thunderkick, notably the casino Madame Chance . This duly established platform offers new players a welcome bonus of 400% up to € 800 on their first deposit. With this excellent incentive, you can enjoy the new Roasty McFry and the Flame Busters slot machine.