The Darts Heroes slot machine and its intergalactic darts championship 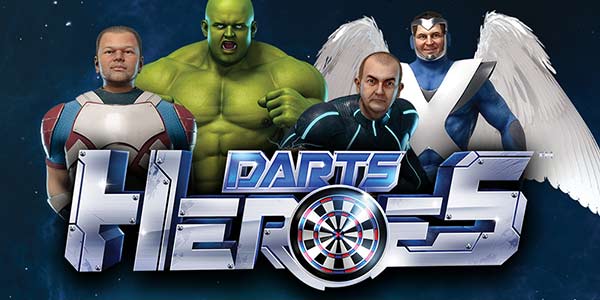 Last year, the Stakelogic slot machine developer presented the Football Gladiators title, which had met with great success at the ICE 2016 exhibition in London. The video slot plunged us into the midst of a fight between four football players – who had become gladiators for the occasion – against their mid-man, half-monster assailants.

Stakelogic seems to have handed over the cover at the ICE 2017 exhibition, since this time, it is not four star footballers who have been put in the limelight but four legends of the game of darts. So the online slots Darts Heroes, projected us in the intergalactic final of a dart tournament, in which four humans endowed with super powers to oppose their precision and skill.

The Darts Heroes slot machine and its features

Darts Heroes presents four legends of contemporary darts to the neophytes in the characters of Raymond van Barneveld, Michael van Gerwen, Gary Anderson and Phil Taylor. These four players represent the fine flower of this skill game and their talents are worth to be represented as a superhero in this slot machine, and to embody a wild each with possibilities for the player to maximize his winnings.

On the structure of the machine, Darts Heroes offers 243 lines of payment through its 5 reels and 3 rows of symbols. Players will find cards from 10 to ace playing cards, the effigies of each darts player, scatters linked to each superhero and four different wilds symbols. The symbol of the unicorn refers to the famous equipment manufacturer Unicorn®.

About the ambience and atmosphere of the Darts Heroes Slot Machine, the player is immersed in the final of an intergalactic tournament in the center of an arena that is imagined crowded with spectators, Full of flash and bright white and blue lights. The atmosphere is futuristic and rather well set up, while a rather playful soundtrack accompanies the spins.

The Darts Heroes slot machine was developed in accordance with Stake logic’s MOBi® line, adapted to serve mobile media in HTML5 format and accessible from the iOS, Android and Windows Phone operating systems.