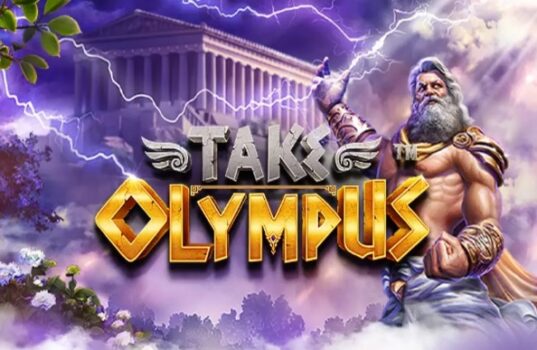 Take Olympus gives us 5×4 reels with 50 active lines. It is a game that will depend on series of 10 spins that you will experience in the Cycle of the Gods, a build-up which ends with a God Event during the last spin. The features include Spreading Pleasures, Archer of the Wild, Waters of Chaos , Allfather’s Grace and Wrath of Abundance. With each one of those features, and this new slot will pay the maximum 2,328x the stake while the RTP will be a bit low, at 95.49%.

Your bets will be designed to cover all lines, despite the fact that there doesn’t seem to be a connection between the 10 coins used and the 50 lines. The betting range in Take Olympus is between $0.10 to $40.

It is a great slot machine from various perspectives but I wouldn’t place its top big stake in that genre. Probably, the game can pay 2,328x the stake which you could transform into a prize worth $93,120.

Then again, it has low unpredictability which makes it more interesting. Lastly, the game is required to pay less than others if we go by the 95.49% RTP that was announced.

You play this slot machine in series of 10 spins which is called Cycle of the Gods. In each pattern of 10 spins, there is one of five gods which rules over it. The power of the god develops along the way and afterward is released for the tenth spin. It resets from that point onward and another random god is picked for the following cycle. You can’t have a similar god a several times in a row.

Archer of the Wild (Apollo) – During his reign, the images with Bows or Apollo will be stamped where they show up and during the tenth spin each one of those positions will be transformed into additional wilds.

Spreading Pleasures (Aphrodite) – you are checking positions where you got the Aphrodite or Leaf symbols. For the last spin, those positions are transformed into Mystery Boxes and afterward changed into a one type of ordinary image. Unfortunately, it can not be a wild.

Waters of Chaos (Poseidon) – For this god, it is the Poseidon or Trident images which are used for this case to add to a counter. It goes up by 1 for each new such image. Toward the end, the cycle ends with respins, which relates to the degree of the counter.

Wrath of Abundance (Hades) – The Lord of the Underworld will use images with Cerberus or Hades to boost a multiplier. On the off chance that there are wins during the tenth spin of the cycle, the multiplier will be applied to their total value.

Allfather’s Grace – Zeus is capable for taking the powers that belongs to the other gods and it will show up as a wild image on the reels. It gives you 10 free spins if he is visible and covering a full reel with four images, given that the four different gods are also visible at that point.

As he can get the power of the others, he will add secret images, multipliers, respins or wilds.

With an emphasis on Olympus, home of the Greek gods, the background image shows us a good looking garden filled with flowers, temples made out of white marble and ancient statues. It is simply the kind of heaven you would expect these gods live in.

Images will depend on pictures of deities, for example, Aphrodite, Poseidon, Apollo, Hades or Zeus alongside different golden symbols showing bow and arrow, thunderbolts, monsters, tridents and leaves.

Take Olympus has a lot to do for you and the designs are better than expected. Low unpredictability, very great rewards for its level but also a low RTP, I would say that there are more pros than cons to it.