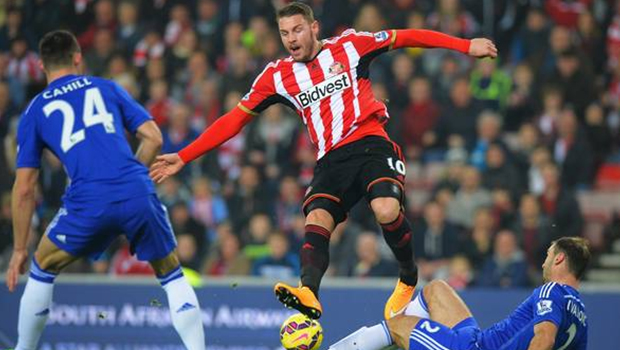 Besides from the fact that Jose Mourinho and his players are having the taste of only the third time in Premier League this season, the Sunderland boys were just inches away from defeating Chelsea in a late chance that was created for Adam Jonson, if he wasn’t just inches of the bar. It would have been Chelsea’s first defeat this season in all competitions, but at least Sunderland’s boys managed to do something out of today’s hosting on the Stadium of Light, at it is the first time that Chelsea did not put away a goal in 90 minutes game.

They would have been 9 points away from the 2nd Southampton who plays its game with the team who breaths in their necks from the 3rd place, Manchester City tomorrow, but the blue Londoners will have to be happy with the seven points difference.

Earlier today, in the League’s 13th fixture of the Barclay’s Premier League, Manchester United Finally found it’s game and won the third game in row under Louis Van Gaal’s command, beating not so strong this year Hull City at Old Trafford with three goals to null. In the 16th minute Chris Smalling opened the score line with a nice shot that gave Manchester United the lead of 1-0, followed by the captain Wayne Rooney’s goal in the 42nd minute. In the second half Robin Van Persie with his fourth goal in 12 matches sealed the result making it 3-0 for the third victory in row for the red devils.

Their former teammate Danny Welbeck threatened United’s fourth place on the Table with an amazing header that took the three points from West Bromwich Albion and took it to the Emirates in Arsenal’s favor.

The Arsene Wenger’s players made the difference in class visible on the pitch, but only managed to put away one goal, despite the more than 15 shots to Foster’s goal. WBA was close to equalizing the result but Berahino will have to wait for his 8th premier league goal in the next games, as the ball bounced off the bar. During the match Arsenal’s fans pulled put a transparent that was addressed to Arsenal’s manager, Arsene Wenger, reading “Arsene Wenger. Thanks for your memories, now it’s time to say goodbye”. This is how the fans show their anger to the manager for serving them the worst start of the season for Arsenal since the 1980s. While statistics and numbers are showing this, the French manager speaks to the media that this will be one of the best years for the Gunners, just be patient and see.

Arsenal has had trouble with injuries lately, as they are without 7 starters, including their two goalkeepers, so Martinez, the Arsenal’s third goalkeeper now receives a chance in the last three matches, but behaves good between the postst.

Newcastle failed to keep their run of seven league matches without loss, and were struck by the East Londoners West Ham United.