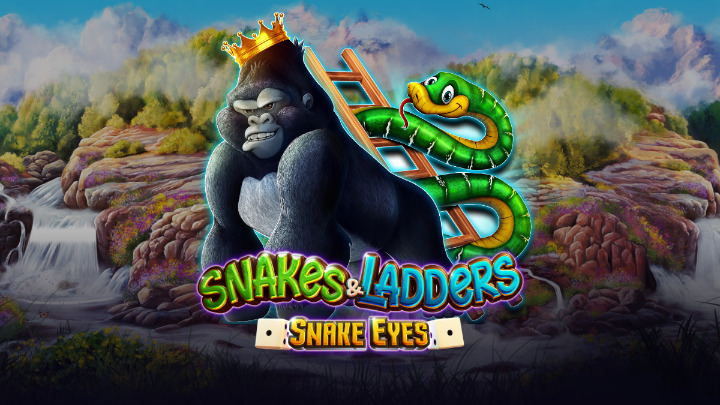 Snakes and ladder snake eyes is a wonderful game by the Pragmatic Play developers after teaming up with the Reel Kingdom. The online slot, which is engaging and competitive, will keep you glued to your screen, trying your luck to win. But this game became the talk of the town by players became suspicious after the developers came up with the second version of snakes and ladders, which saw most people think faster.

The good news is that the game is authentic and is a better way to relax and keep busy throwing the dice and moving up the ladder for a win. Moksha Patam is the first incarnation of an invention from ancient India, which is part of the concepts of Karma and Moksha.

Moksha is a freeing soul from the wheel of Samsara, similar to birth and death, resulting in an infinite bliss state. All these can be hard to comprehend, but the game concept is much simpler as it enables players to reach the final square. The ladders help players reach closer to their target while the snakes swallow them back with some steps. This game is helpful in the usual human race as it teaches how to embrace different challenges through the life ladder, unlike the other slot games, which focus on bonuses.

Snakes and Ladders Snake Eye has five reels, three rows, and ten paylines. This requires one to be keen to make a win and pocket something worthy. However, unlike the previous versions, this one has better pixel count and graphical edges, which makes playing outside a waterfall meaningful.  You also have to look out for old feeling that is less than the 8-bit.

There are also changes in the numbers on this game while the rest have been maintained. One such change is the RTP which reduced to 96.08%. It’s a high-volatility game with a 5 out of 5 ratings, and its potential has not been affected. To start the game, you need to make a stake of 20p/c to 100 euros per spin. Additionally, you will not have to look for a physical casino or studio to play this game as it’s accessible through a phone, laptop, or tablet.

To win in this game, you need to land at least three matching symbols on different reels on the same payline beginning from the far left reel. You can also hit the board to earn a bonus. The nine pay symbols will also give players an easy time. The pay symbols include the 10-A card royals, eyes peering out of baskets, gorillas, snakes, and bananas.

Landing 5-symbol winning lines will earn you 5-10 times your bet for card icons. But for premium tiles, it will be equivalent to 15-50 times the bet. The wild dice symbols are activated if they land on all the reels to replace the normal pay symbols. If you hit the wild dice, it will result in 1,2 or 3 dots, equivalent to 1X, 2X, or 3X, the total win on the spin, respectively. However, when the wild dice land on the winning lines, a 5-of-kind hit, will earn 50 times the original bet.

The Snakes and Ladders Snake Eye has unique features that keep you glued to your phone or laptop, trying your luck. Getting 3 to 5 scatter symbols will earn you the snakes and ladders board bonus containing the 12, 13, or 14 dice rolls. However, if the bet trigger 4 to 5 scatter symbols, one of the symbols can turn into a snake bonus symbol earning two more dice rolls.

You will get a chance to play the bonus game on a 12 by 12 board with 144 squares. If you start the game at square one, you’ll be represented by a monkey token. Note that the grids contain random items like bet multipliers of 4X-100X, snakes, bananas, or total win multipliers. 2 dice will roll at ago until it achieves all the number of dice rolls a player wins as players get around the board. However, if you roll a 1-1 die, you’ll be rewarded an additional die.

If you land a square with any of the items, the following will be the results;

Remember that if a rope charmer is hidden in any of the squares, it will force the monkey to move higher on the board. But when it turns out to be round ends with no rolls, a player will land to the 144th square, after which the total amount earned is collected.

In this game, the bonus round enables a player to earn 20X the original bet. However, if one cannot achieve this, the monkey’s rage mode will be activated, making it move toward the edge of the grid while assembling the multipliers and values on its pathway. Finally, the total amount of multipliers will be part of the final prize you take home. But in rage mode, the monkey will not activate the bananas, ladders, charmers, and snakes.

If by chance, the monkey makes it to the 144th square, it will be the end of the rounds it should make. But if it retriggers this, it will lead to the rolling down of two dice. If not, it will lead to a double (1-1,2-2,3-3,5-5,6-6), which will retrigger the bonus with an identical number to the one that initiated the rolls. In the end, if any doubles roll while the round is active, part of the snake at the top of the reel will fill up. When all the sections fill up, one of the bonuses retrigger will lead to an award.

As you have seen, Snakes and Ladders Snake Eye has many notable differences from the game’s original version. However, you need to note that there are no serious changes in the game since the developer only changed the rules and gave it a new facelift. The graphics are also different as they don’t involve the 8-Bit. Additionally, the games look better than other slot games from Pragmatic Play.

Something unique about the game is that the wild dice dots will fill the snake, earning a player a bonus round and increasing their chances of winning. But when the bonus round shifts, it will equal the original bonus round. Note that the rope charmer got to replace the skyscraper from the original version of the game. The rest of the features have not changed as the maximum win is still 53,000 times the bet, while snakes and ladders give the players an unmatched gambling experience.

In our view, this game could be much more boring had the developers failed to make the new changes. The upgraded graphics will make anyone love to play the game anytime. On the other hand, the game’s features will help any player earn more rewards than the bet placed.