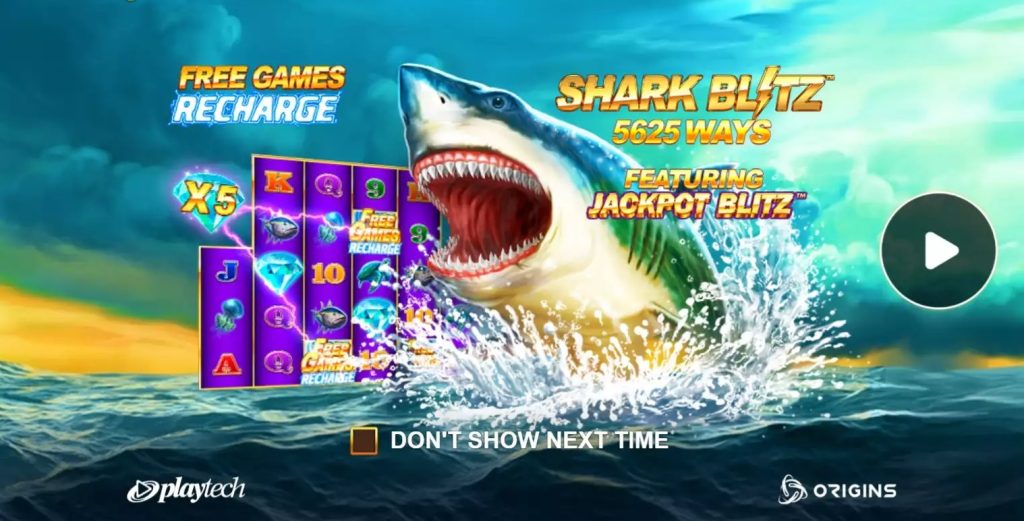 There’s already a Blitz series of slot machines dedicated to Rhinos and Buffalo, but it can’t harm to add another if it adds something fresh. Shark Blitz is a new Playtech game that seeks to do just that, with a colorful design and a less common topic than its predecessors.

Shark Blitz is a 5 reels slot with 5625 ways to win  (3-5-5-5-3 symbols) Multiplier wilds, free spins, scatters, and other unique elements are included in the game. The combination of a top prize of 37,500x the stake, as well as progressive jackpots from the Blitz network, is what most players will enjoy. Although the RTP of 95.10 percent isn’t ideal, a low value for a jackpot slot isn’t unheard of.

While the minimum bet is low, with $0.25 activating all 5,625 possibilities to win, Shark Blitz allows players to wager up to $200 per round, making it an excellent choice for high rollers as well.

Shark Blitz strikes an excellent mix between risk and reward, at least in terms of potential, thanks to its medium volatility. If you’re extremely lucky, you can win 37,500 times your stake, and that’s before we get to the progressive jackpots.

The Blitz network offers four progressive jackpots, the best of which is the Blitz Jackpot (worth $100,000+). The Major, Minor, and Mini Jackpots are the other three alternatives.

The Return to Player, or RTP, is the part of the game that I’m not enthusiastic about. It’s currently at 95.10 percent, which is far lower than the 96 percent that most people expect. But that’s to be expected from a progressive jackpot slot; they rarely perform as well as conventional ones.

Features of the Shark Blitz Slot

The last five reels are the ones that potentially have Diamond Wilds appear on them. You can use them as substitutions, but they can only be used in conjunction with a standard sign. The fact that they are using strategies to win aids them in their work.

Crunch mode is a random event that awards you with two scatter symbols on the reels. This simply increases the chances of the free spins triggering that round.

The scatter symbol features the Free Games Recharge logo. The free spins are triggered when three or more of these appear anywhere on the reels. In exchange, you will receive between 8 and 15 free spins. Once you’re inside, you can retrigger them by collecting three or more scatters.

When you acquire those 2+ scatters needed for a retrigger, you’ll Recharge the game, increasing the multiplier and bringing the number of rounds back to the same as when you first won (it resets, not including the new ones). The multiplier increase varies between 1x and 5x depending on the exact quantity of scatters.

The progressive jackpots are triggered by a random bonus game in which 20 symbols are displayed for you to choose from. You make selections until you have three of the same type, at which point you claim the prize.

It’s a game with a unique concept that’s interesting but not out of the ordinary. It simply increases the amount of possibilities to win by adding more symbols to the middle reels. Otherwise, you’re looking at an ocean-related theme with the shark as the main character. In the background, there isn’t much to look at; it’s just watercolored in a dark purple.

On the reels, though, you’ll find a number of Royals, six in all, ranging from 9 to A, followed by a variety of sea creatures. Manta rays, jellyfish, turtles, fish, and sharks are among them. There are also a few feature emblems that use images of the Diamond or the Free Games logo.

Overall, Shark Blitz is a good slot machine to play, but only if you want to win the progressive jackpot. Even while the features are interesting, the low RTP ensures that there will be lots of other games that perform better on a regular basis.