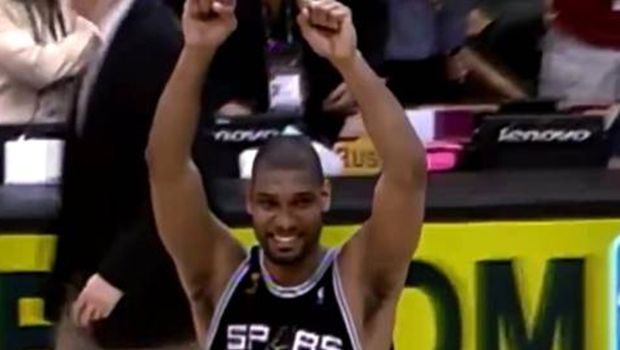 In 1997, the history of the San Antonio Spurs changed forever. With a number one draft pick who had not reached the Alamo if not for the injury of David ‘Admiral’ Robinson last season, a shy type, from Wake Forest, who started playing basketball in high school, landed in Texas. That boy 21 years old today, April 25, 2016, 40, and does so with five championship rings on his fingers, one for each time he has lifted the Larry O’Brien trophy. Some time ago that this guy became a legend. The Spurs are what they are because a June 25 chose to Tim Duncan , with permission from Gregg Popovich , of course.

40 springs fulfilled today the best ‘four’ of basketball history, that of the 1,163 baskets against table ( ESPN) . In addition to rings, Virgin Islands accumulates in your resume hundreds of brands that are already NBA history. For example, a few days ago he became the third player to reach 1,000 career victories (Regular Season / Kareem Abdul-Jabbar and Robert Parish ) and the first to do it with a single shirt.

It has records of all kinds both regular season and playoffs. Yesterday, without going any further, he managed to win number 155 in post season , tied for second place with his former teammate Robert Horry and only six wins of the 161 with which he finished his career Derek Fisher .

The legacy of Duncan, who still has some brushstrokes leave historical records of equipment (the Spurs have not fallen below 60% of victories since he entered the league: 19 straight seasons), single ( 10th in minutes, 14th in points , 7th in games, 6 rebounds and 5th in caps) and also many of ‘Big Three’. Along with Tony Parker and Manu Ginobili , overcame the Celtics mythical Bird-Parish-McHale (540) in number of victories in regular season and the Lakers Showtime ( Magic-Jabbar-Cooper , 110) in victories post season. Never we will stop talking about Timmy.

After more than a week of playoffs , the Cavaliers advancing steadily in the Eastern Conference, while the Spurs and Thunder do own in the West. The Warriors Curry semifinals are already very tight and there are four qualifiers.

Some of the matches in the playoffs by Jackpot Bet Online.

Match 7: Raptors-Pacers. Sunday May 1, time to be determined

* The seventh will only play if necessary .