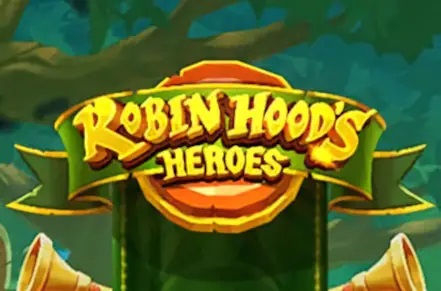 This time, Just For the Win provides gamers another chance to take adventures in the woods together with outlaws popular for taking loots from the rich and giving them to the less fortunate.

Playing Robin Hood’s Heroes is the same as getting into some medieval banquet vicinity where musicians stir a riot of some tune, the dancers move rhythmically, spectators clap, and everyone has a good time. A chipper slot is placed at Sherwood Forest’s borders with Nottingham Castle in the background. Once a Robin Hood (wanted)poster flutters, some chest sits on the floor, while the active slot panel lies close to the center.

The grid has six -reels, of which four icons show up on the two outer reels and five icons on the four inner reels, providing gamers a 4-5-5-5-5-4 formation. It uses the ways system and offers 10,000 win ways taking place once matching icons fall on any row so long as they lie on adjoining reels and begin from the leftmost side.

It comes with three RTP configurations and the highest value being 96.05% and falling to a low of 92.21%. It has high volatility of the three, and its hit rate varies between 25.35% – 28.46%. Therefore, one in four rotations gives a winner. Obtaining your outlaw is possible from any device where stakes of 20 p/c – £/€50 per awarded rotation can be placed.

Moving to the paytable, we see ten regular awarding icons. Beginning with the low-value tiles are 4 card suits, diamonds, clubs, hearts, and spades, awarding 0.5 times the stake for a 6-of-a-kind victory. Following are mugs, knives, hats, Friar Tuck, Maid Marian, and Robin, awarding 0.8-5 x the bet for 6-of-a-kind. Showing up at the base play or free rotations on the reels 2-5 are wild icons and Wild Split icons. Both can substitute any standard award icon. Once a Wild Split icon strikes, it splits into 2-5 wilds, multiplying the winning ways.

Developer: Just For The Win

Free rotations were shortly alluded to, and those are Cash Collects and Cash Grab attributes, as a Buy attribute where available.

Falling on six or more Money icons on the base play activates the Cash Grab additional, paying three respins. Any icon that falls reconfigure the respins count to three. The activating Money icons stay in place, while the extra round happens on a panel upon which only Money icons or three Hero icons may fall– the Adder, Doubler, or Collector. Every Hero icon got a counter that multiplies by one on every rotation. Once the counter is loaded, the Hero icon triggers, and the counter reconfigures back to zero and could be triggered again.

You already know many Robin Hood games, and you understand why after participating in Robin Hood’s Heroes. Something endearing regarding the Robin Hood tale, which is loaded with fascinating characters, rich scenery, and adventure. With Robin Hood’s Heroes, Just For The Win did not go into the story’s depths, keeping away the conflict between the goodies and baddies found in slots like iSoftBet’s Sheriff of Nottingham series. Robin Hood’s Heroes presents things with much light and joyfulness as possible. The slot’s chipper attitude moved us in to learn what other things could be in the package.

Once in it, the others aren’t bad. Just as the theme, the attributes are somehow light also, functional, and occasionally give something thrilling. Nevertheless, we also find hints of outer influence on the whole place, making light of their impact. Despite their trademark, the Wild Splits are from the Nolimit City playbook but could be helpful, mostly on free rotations where they happen to be the only wild type that shows up. Progressing to the Cash Grab is where we have fewer Money Mariachi flashbacks by the nature in which unique icons load their counter prior to their effect activates. Apart from this, the two additional rounds are entirely different, and Cash Grab did not last anywhere near the duration of the extra round in the Money Mariachi could. Cash Grab’s panel is static for one, implying that reels are not increased, and the maximum win potential happens to be 5,000 times the stake.

Highlighting singly, there is not much-taking place in Robin Hood’s Heroes. Nevertheless, it was able to gather everything in a good way. A big section of enjoyment was the high scale of the cheerfulness the slot exudes. However, its sea of attributes maintained the whole session varied. There is a thrill for Robin Hood lovers to encounter, so long as they are fine with shorter than the standard assortment of the Merry Men and the absence of Sheriff Antagonist.