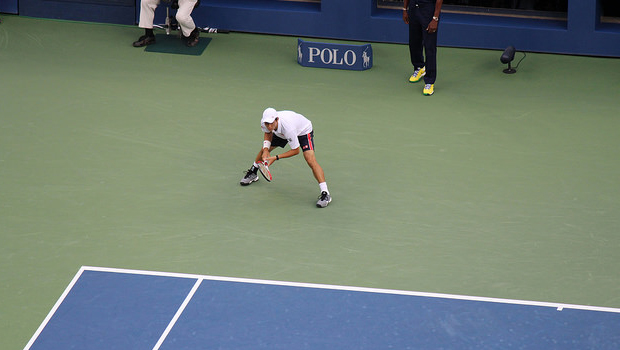 The 2014 mens tennis season has been all about the challenging of the establishment of the Big Four players in Novak Djokovic, Rafael Nadal, Roger Federer and Andy Murray. These four players have won 36 of the last 40 Grand Slam events over the last decade and half of those four non Big Four wins came this season. The other two saw Marat Safin win the Australian Open in 2005 and Juan Martin Del Potro’s US Open win four years later, but the two upsets this year saw the biggest names shaken. Who were the biggest rising stars this year though?

Although he is aged 24 and will turn 25 just four days after Christmas Day, Japanese superstar Nishikori makes the list for several reasons. He started the year 17th in the ATP rankings and following an excellent and consistent season before his exploits at the US Open that saw him become the first Asian man to play in a Grand Slam final catapulted him into the spotlight. He defeated three of the top ten, including Australian Open winner Stanislas Wawrinka and world number one Novak Djokovic, before losing to Marin Cilic, but the experience will live long with the Japanese player and I foresee a bright future for him. Can he take a first Grand Slam title in 2015 though? Coral are offering odds of 5.00 for him to do so!

Raonic is another player who is another player who is not exactly a youngster on the tennis scene at 23, but 2014 has been a year that has seen the Canadian’s star shine brightly. He has consolidated himself inside the top ten in the world and has started to show his skills on the big stage. He won in Washington in the build up to the US Open following a last eight stage appearance on the clay of the French Open and then reached the semi finals at Wimbledon. 2015 will see Raonic close on a Grand Slam title assuming he gets a reasonable draw and I am certainly confident that he will participate in his first Grand Slam final next season.

19 year old Australian Kyrgios started 2014 at 183rd in the ATP rankings and at the time of writing he has moved up 132 places to sit 51st in the world and on the verge of breaking into the top 50 players. After having some success at the minor events early in the he shot to fame with a stunning four set victory against Rafael Nadal at Wimbledon to make the Quarter Finals of the that Grand Slam event. He was beaten by Raonic in the next round but he was ranked 144th at the time and defeated four players, including the then world number one, to showcase his massive amount of ability. The only way is up for the youngster from here and I expect to see him continuing to go deep in tournaments during 2015.