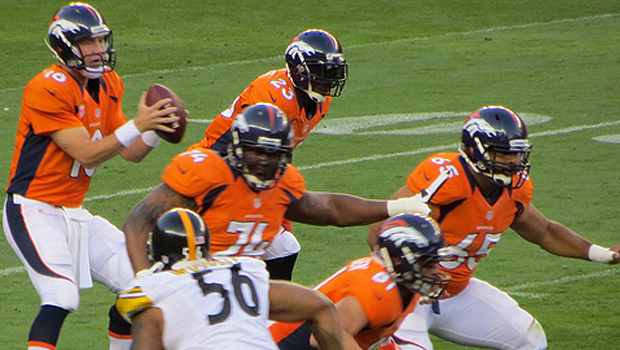 One of the more popular betting markets during the NFL season is which player will assert himself as the top player and claim the MVP award for the regular season before the post-season playoffs begin. Everyone has their favourite player and will be willing them onto glory, but who will it be this season? We take a look at some of the favourites to claim the 2014/15 MVP award.

The favourite to claim the MVP award for the current season is the biggest winner of this title in NFL history in Denver Broncos Quarterback Peyton Manning. The 38 year old has been named MVP on five previous occasions as he won it with the Indianapolis Colts in 2003, 2004, 2008 and 2009 before moving to the Broncos and triumphing for a record fifth time last season as he guided his team to the Super Bowl only to be defeated by the Seattle Seahawks. The Broncos are favoured to go one better this season and triumph in the Super Bowl and if Manning can guide them to victory in the biggest event in world sports then he will be deserving of a sixth title.

35 year old Brees plays as the Quarterback for the New Orleans Saints and helped his side to victory in the 2009/10 season as he put in a Super Bowl MVP performance as the Saints defeated the Indianapolis Colts, then led by Peyton Manning. Although he won that award he is yet to claim the regular season MVP title and despite being the second favourite to do so he will need to do something special as the Saints are just eighth favourites in the betting markets to lift the Vince Lombardi Trophy in February.

Green Bay Packers QB Rodgers comes into this season leading the all time passer rating during the regular season with a score of 104.9 and he backs this up in the post season too with a rating of 103.1. The 30 year old has been a more than capable replacement for Brett Favre at the Packers following the retirement of the three time regular season MVP winner at the end of the 2007 season and he will be looking to guide his team to a fourth NFC North title this year to make the post season and then his aim will be a second Super Bowl title following their 2010 win over the Pittsburgh Steelers.

Arguably the most famous name in the NFL, Brady has spent 13 years as the starting Quarterback for the New England Patriots and in this he has brought his side to the Super Bowl on five occasions where they have won three titles. The Patriots are in the top three favourites to win the Super Bowl this year and if they do it will be largely down to Brady and his beguiling skill. He is one of just two players to win the regular season and Super Bowl MVP awards on multiple occasions and even at 37 he still has plenty left to give, but will this see him become a three time winner of the regular season MVP award this season?

Next Article
There are 2 comments for this article