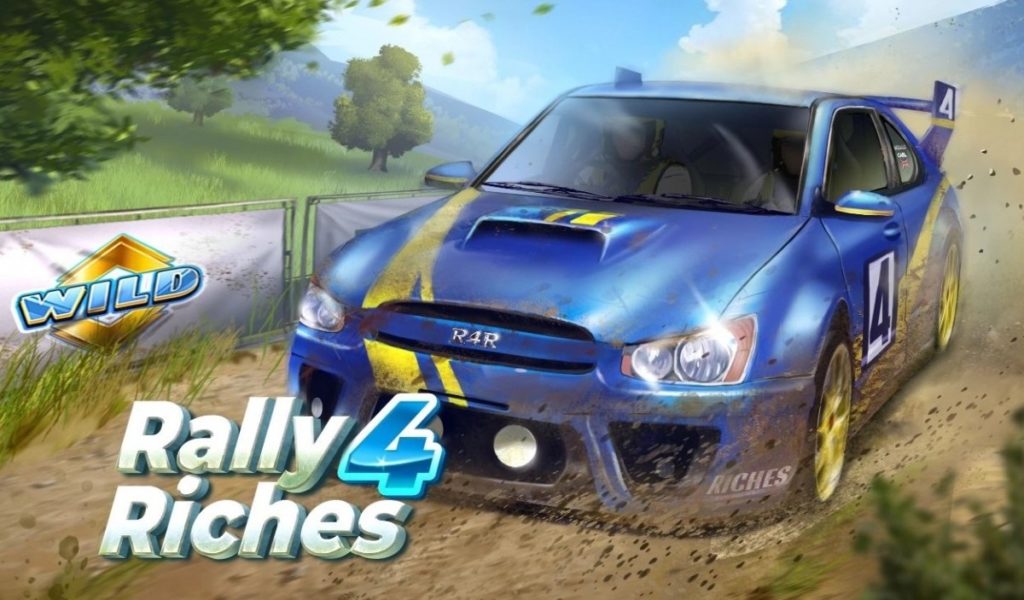 Rally 4 Riches is a 3-reel video slot with 5 fixed paylines. There is an additional BONUS REEL that is active on every spin.

On the BONUS REEL is it possible to land: MULTIPLIER symbols that multiply any winning combinations by the value displayed on the symbol, NUDGE WILD symbol that move any partially in view WILD symbols so that they fill the reel, or the BONUS symbol that triggers the CHAMPIONSHIP RACE BONUS feature.

If there are no winning combinations with a MULTIPLIER symbol on the BONUS REEL, the MAIN REEL RE- SPIN feature may trigger. The BONUS REEL is held in place and the 3-reels will RE-SPIN.

The CHAMPIONSHIP RACE BONUS feature involves a race around board that consists of 25 spaces, including the start/finish space. All other spaces consist of either a times total bet multiplier or a nitro boost. The players movement is determined randomly, moving up to 6 spaces on each move. Landing on a value (i.e. X1.2) will award that prize, multiplying the value by the total bet staked. Landing on a nitro boost space will move the player forward by the amount stated on the space. On each move the players racing position in the race is displayed via a leaderboard. At the end of the race, the players racing position is determined, resulting in a different feature.

First place prize: JACKPOT PODIUM bonus game. This feature is automated. A light will start on the bottom tier of a five-tier pyramid. The light will move between the spaces on each tier and eventually stop on a space. The space will either show a times total bet value or an “up” arrow. Landing on the times total bet value will award that prize and end the feature, with values ranging between 7x and 1000x. Landing on the “up” arrow will move the light to the next tier. Landing on a value on the penulatimate row triggers the gamble feature. Choosing to gamble can result in winning the 1000x top prize or losing the prize that triggered the gamble. Choosing to collect awards the prize that triggered the gamble.

Second place prize: 4 WIN SPINS feature. Win spins are free spins where a winning combination is guaranteed on each spin. Each spin will guarantee a MULTIPLIER on the BONUS REEL. The NUDGE WILD is active on every WIN SPIN.

Third place prize: 4 FREE SPINS feature. The only symbol on the BONUS REEL is the MULTIPLIER symbol, it is not guaranteed. The NUDGE WILD is active on every FREE SPIN.

If the player finishes fourth, the bonus feature will end, and the player will be awarded with the winnings they collected from the spaces during the CHAMPIONSHIP RACE BONUS.

The best strategy is to always GAMBLE on the JACKPOT PODIUM.