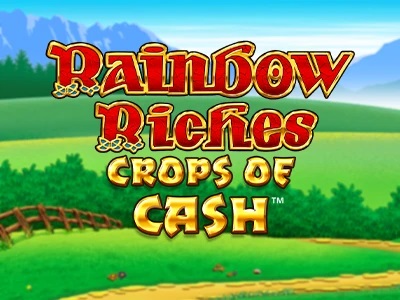 The most recent in a very long line of slots that have made history in Light & Wonder’s collection is Rainbow Riches: Crops of Cash. Although they often have similar aesthetics, with the Leprechaun playing the central role, their features can vary greatly. A Hold & Win variation of the demo game is available here.

There are 1,024 possibilities to win when playing on 5×4 reels. Its main draw will likely be a Hold & Win re-spin function, but wilds will also be included. With the correct qualities, you might win a jackpot worth up to 11,520 times your original wager. First, I’d make sure the RTP was set to 96%.

With wagers ranging from $0.10 to $20, Crops of Cash offers a simple range of wagers.

If you’re lucky, the slot machine will pay you 11,520 times your wager as far as awards go. The RTP has a range with a few settings and can reach a maximum of 96%.

I’d like to first talk about the wild symbols before we move on to the respins. These only appear on the final four reels and are not seen anywhere, thus they do not have any prizes of their own to provide. But they’re useful as stand-ins.

The widely used Hold & Win bonus, which is now present in many slots, will be the main feature. It is activated when six or more Coin symbols are present at once. Initially, you are given three respins; however, they reset each time new Coins land and lock, just like the triggering symbols do.

The values can change depending on the type of coins you have. Bronze coins pay just 0.5 times the bet, silver coins pay 2, and gold coins pay 5.

Additionally, it contains Leprechauns that you may gather, which could raise the reels in this mode and upgrade the prizes already on display (the value of the coins).

Up to 5×7 reels could be available, with each jackpot paying up to 50 times the bet (Gold Coins value if you upgrade them four times).

Particularly in the Rainbow Riches series, the Irish theme is accompanied by a specific blend of symbols. In this instance, nothing has changed, and the same lush hills are in the distance. Royals, along with toadstools, harps, lucky horseshoes, top hats, the leprechaun, and cash, are used as symbols on the reels. Overall, viewers of this series ought to be accustomed to seeing it.

The Hold & Win style respins are heavily emphasized in Rainbow Riches: Crops of Cash, which might be a pro or a drawback depending on the aspects you like. it’s a respectable addition to a series that is already well-liked and it fills a specific need. I enjoy the slot machine; it  has nice graphics, and has some interesting bonus features. If you can locate it with the RTP set to the highest setting, it is definitely worth playing.