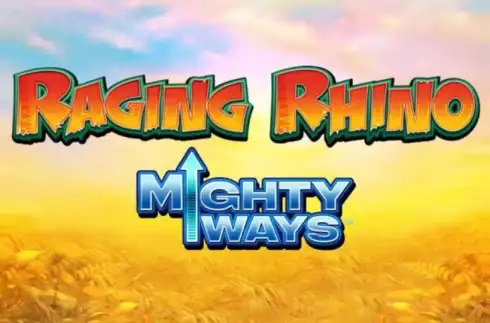 The visuals of all the Rhino slots are similar except that of the Raging Rhino Mightyways. Additionally, the setting of this slot entails African grassland, where players try their winning luck while hiding from the angry rhinoceros.

The rhino has a patch where he moves around, expecting no interference from anyone. The patch consists of golden grass, hills, a lone tree, and golden sunshine. The African-themed slot is attractive because of the artwork. But the look could be more modern, requiring the developers to do something about it.

What’s unique about this slot is the color choice for the grid. The turquoise grid blends well on the screen and distinctly brings out the six reels and four rows. Raging Rhino Mightyways has 4,096 ways to win, but it can expand. It has more than 1 RTP model, the highest being 95.93%, and volatility that’s high/medium. To play this slot, a player needs to place a bet of 20 p/c to 20 euros per spin, and since it’s playable on any device, it enables players to try their luck from anywhere.

For a player to win, they need to have matching symbols on adjacent reels starting from the left. The game happens at a rate of 1 in 4 in the base game round. Additionally, the slot has various symbols, both high and low pay. The low pay symbols are the 9-A card royals worth 0.5-0.9x the bet. On the other hand, the high pay symbols include crocodiles, cheetahs, rhinos, gorillas, and honey badgers and are worth 1.5x-10x the bet.

The wild symbols also appear on the 2nd and 5th reel, and can substitute for any pay symbol. The good thing about the wild symbols is they have multiplier value during free spins.

The mightyways mechanic is one feature to look out for in this slot. When winning ways happen, the mightyways are removed from the grid and replaced by cascade symbols from the above reel. The reel height increases by one or more for every cascade symbol. The reels can extend to the utmost eight symbols high. If six reels attain this height, it paves the way to 262,144 ways to win.

When the expanding reels feature is active, it can increase every reel by two or more symbols per spin. This helps increase the number of ways to win.

When the extra rhino feature is triggered, it leads to additional rhinos on the reels. It can add rhinos to two or more reels during a spin.

But when several wilds are included in a win, the multipliers will be added to the winning value in progression. Additionally, the extra rhinos and expanding reels can activate and land on the 3rd, 4th, 5th, or 6th bonus symbol triggering additional 5-50 free spins.

The rules used in super free spins are similar to those for free spins. However, the difference is that every triggering super bonus symbol earns a guaranteed wild symbol which is added to the reel when the round is active. If the guaranteed wilds aren’t part of the win, the super free spins move to another place on the grid. But when used in a win, it will reappear as the next spin round begins.

The raging Rhino Mightyways slot is one of the African nature-themed slots a player should purpose to sample out. It is the work of the Light and Wonder developers who ensured it has some improvements, unlike the previous versions. It has better features like expanding reels, free spins with multiplying wilds, and extra rhinos. However, the graphics are familiar as it resembles that of previous slots.

Besides that, the slot has made some changes that attract players. The beautiful scenery full of wild animals and an African outdoor experience is out to give players a better experience. The mightyways can expand the ways and reels, increasing the chances of winning as it incorporates the wild multipliers and guaranteed wild or super free spins. The Raging Rhino Mightyways has a maximum win of 12,000x the bet, which makes it amongst the highest-paying slot in this series.

It’s evident that the Raging Rhino Mightywaysslot is worth a player’s time. This is because the developers made necessary changes to meet players’ needs. Additionally, it has great features and attractive payouts, making players earn more. The African setting will also attract anyone looking for something relaxing to play after a long day.