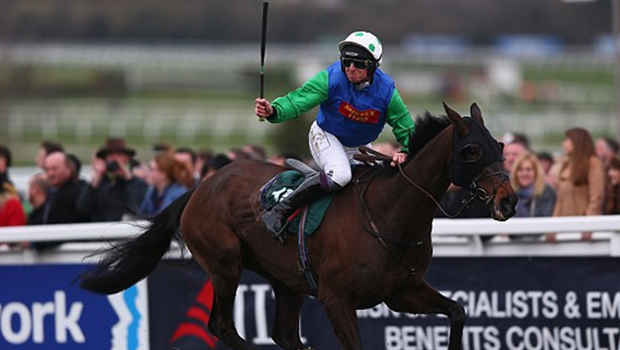 Racing results, action as it happened

The third day of the Cheltenham Festival is over and it’s been another belter.

Tony McCoy landed a winner in his final Festival, Vautour produced arguably the performance of the week as Willie Mullins set a new personal winning record and Cole Harden took the World Hurdle.

The Thursday is always celebrated as an early St Patrick’s Day and the Guinness was flowing. But the overall score is 11-9 to the United Kingdom heading into Gold Cup day.

Charlie Skillen will be in charge of the live coverage from tomorrow morning with the first race at 1.30 again and the big one at 3.20.

Silviniaco Conti is the Gold Cup favourite at 4-1 while backers of Many Clouds, an 8-1 chance, will hoping the forecasters are right about the prospect of some overnight rain.

We’ll keep you up to date with all the action as it happens while delivering top tips and analysis from our team of Marcus Townend, Charles Sale and Mike Dickson at the track.

The favourite, Champagne James, didn’t ever get into the mix and there were a few fallers. If there’s anything to report you’ll read it here.

It was a vintage performance from the 12-year-old, placed twice at the Festival in the past and a veteran of the Grand National.

Winning jockey Jamie Codd said: ‘It was a great training performance to get a 12-year-old to come back, he’s run great at previous Festivals and to do it in the Johnson colours is absolutely fantastic.

‘I didn’t realise what sort of a chance he had today until I got here and a few of the lads said they were backing him.’

Trainer David Pipe said: ‘I booked Jamie a long time ago, I told him he would win, I’m not sure he believed me until he saw his price.’

They’ve got three miles and a couple of furlongs to travel.

They’ve got 22 fences to clear and the’re all over safe. Champagne James is at the back as The Package looks handy early on.

Standing Ovation leads and Champagne James still has almost all of them in front of him.

The Nephew moves up to keep Standing Ovation company as Just A Par, who was creating some interest just before the race, is about midfield.

Sixty Something is Standing Ovation’s closest challenger now but The Nephew is still hanging around.

I spoke too soon, Guess Again is a faller but the favourite is trying to get into this.

Sixty Something makes a move but blunders and is out of this. The Nephew is also a faller.

Standing Ovation leads the turn for home but The Package is laying it down.

The Package takes over but from nowhere Bless The Wings is challenging. Too little too late as The Package holds on.