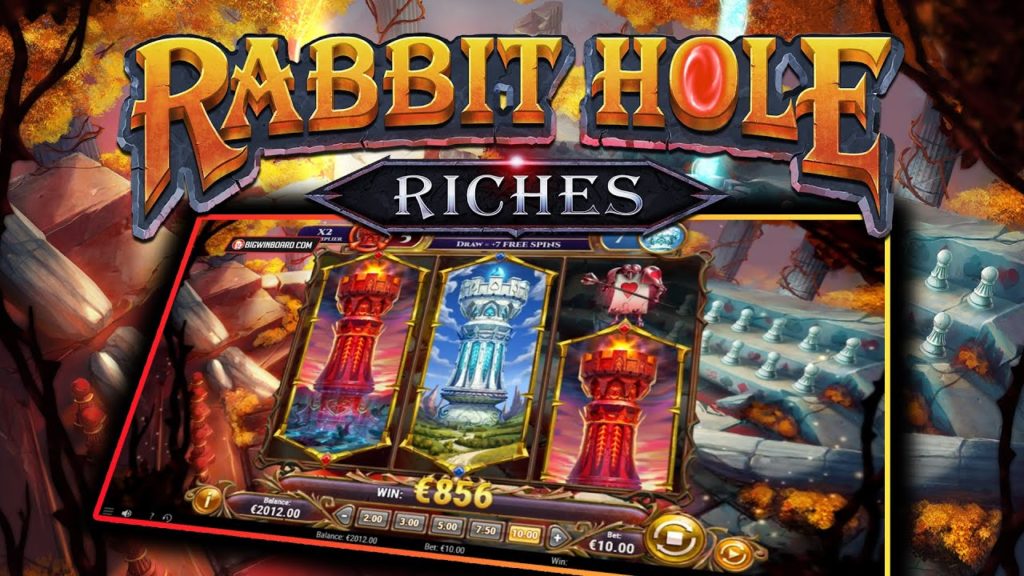 Journey down the rabbit hole to a world of fantastical characters and fantastic riches in this vivid reimagining of Lewis Carroll’s fantastic masterpiece brought to life in the world of slots!

Set in the world of Alice in Wonderland, Rabbit Hole Riches is a 3-reel video slot that brings some of the book’s most beloved figures to the reels for an exciting adventure. You have the Red Queen, the Mad Hatter, the Caterpillar and the Magical Tree that leads to Wonderland as HPs; while the Queen’s Guard playing cards make up the LPs.

There are FIVE different Wilds in the game, a standard Wild during the base game and four Wilds that appear in the bonus games, three of which are stacked Wilds.

The White Rabbit’s pocket watch is the Scatter symbol. It is a mini symbol that will sit in the corner of the regular symbols as they land on the reels. Three Scatters across the three reels on one spin will launch the Rabbit Hole Bonus, leadingto the game’s bonus features.

There are several wondrous features in this slot, adding to the theme and the narrative of the game, giving extra entertainment to the players:

At any point during the base game, the White Rabbit may make an appearance and throw two Scatters onto the reels as they’re still spinning. The reel left without a Scatter will then turn into a suspense reel and slowly come to a stop. If a Scatter lands on this third reel, it will trigger the Rabbit Hole Bonus.

Once the Rabbit Hole Bonus is triggered, it will open four portals to different parts of Wonderland, and the White Rabbit will randomly choose one. His choice will decide which bonus game is activated.

It’s time for a tea party! Triggering Tea Cup Party Pick Bonus will award the player one free spin which will only contain HP symbols.

Once the spin is complete, the player can pick from one of four teacups to reveal a HP symbol and either ‘collect’ or ‘continue’.

If the HP they selected is on the reels after that spin, it rewards them with an instant prize for every occurrence of that symbol. If their chosen teacup told them to continue, they pick another teacup; if it told them to collect, the feature is over.

The Cheshire Cat Re-Spins are re-spins that will continue, so long as the player gets a win on the reels giving the potential for unlimited re-spins!

At the start of the re- spins, the Cheshire Cat will land on one of the reels as a fully stacked Wild. Each time the player is granted a new re-spin, it will move across the reels helping to create winning combos.

Once there are no wins on the reels, the feature will end.

Tower Power Free Spins is a battle between good and evil, and you must pick a side! At the beginning of the feature, players are asked to choose a Tower, either White or Red. The Towers are stacked Wilds that will appear on the reels during the free spins. There are seven free spins in this feature

For each space that a Tower covers during a spin +1 will be added to that Tower’s total (Towers can land partially on the reels).

At the end of the spins, the Tower with the most points wins. If the player picked the winning Tower, they will receive a multiplier on their accumulated winnings from the feature. If they picked the losing Tower, then they collect their winnings, and the feature ends. A draw will result in a re-trigger of the feature and the chance to pick a new side!

In this feature, the Queen of Hearts has all the power as she becomes a Wild, and can grant you unlimited multipliers AND unlimited free spins! Players are initially awarded eight free spins where only the Queen Wild and her army of guards will land on the reels.

During this feature, there is an active multiplier that increases by +1 for every win picked up on each spin, with no limit!

It’s possible to re-trigger these free spins by landing three scatters on the reels; re-triggering the feature awards an additional 3 free spins; there’s no limit to how many times it can be re-triggered!