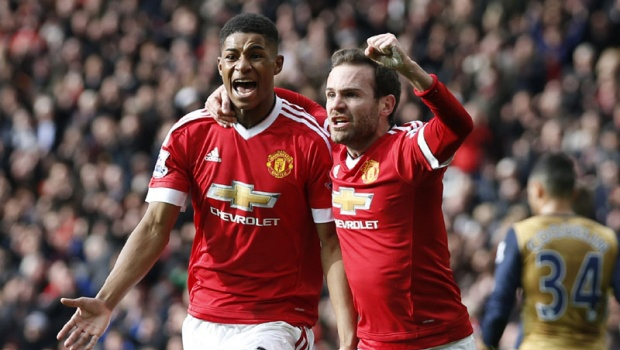 Manchester United’s players have won at home to Arsenal 3: 2 in a match the 27 th round of the Premier League while Tottenham 2: 1 beat Swansea

Manchester United’s players have won at home to Arsenal 3: 2 in a match the 27 th round of the Premier League while Tottenham 2: 1 beat Swansea.

After the awful results that Manchester United has been presenting to the fans, they finally managed to beat one game, and no less nor more, but the all mighty Arsenal, who are one of the favorites in winning the Premier League title this season. It was a match played in Manchester in the amazing and full stadium Old Trafford, with an interesting player making the difference to the game. Read below or on Jackpot Bet Online facebook page to find out.

In the derby at Old Trafford, United took the lead with 2: 0 goals from Markus Rašforda, who today made his debut in the Premier League. He was with 18 years and 120 days became the youngest player United, which is in one premijerligaškoj match scoring two goals. Behind him are the legends of the club Wayne Rooney, who has managed to do so when he was 19 years and 21 days and Ryan Giggs with 19 years and 83 days.

Rašford doubled the lead on 32 minutes when he headed a goal after a good addition Jess Lingrada from the right.

Arsenal reduced the deficit in the 40th minute. Mesut Ozil’s free kick and chipped the ball into the box, but Danny Welbeck’s header into the net.

Tottenham’s players have won after turning Swansea at home with 2: 1 and gained a sixth consecutive victory.