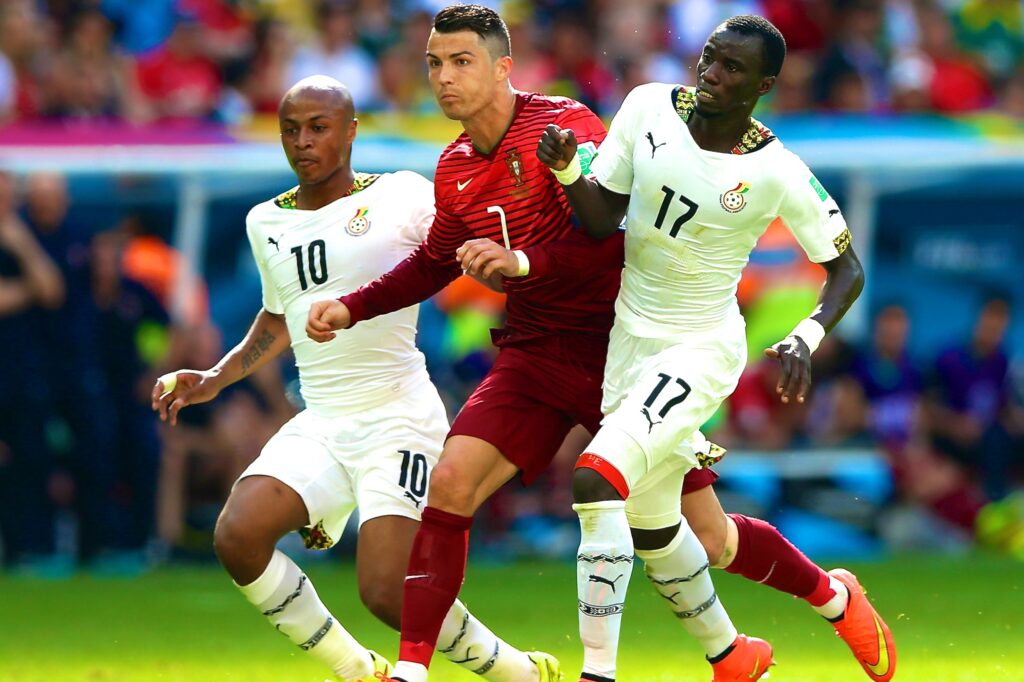 Portugal will play Ghana in their opening World Cup 2022 Group H match on Thursday at Doha’s Stadium 974 in an effort to draw attention away from the never-ending Cristiano Ronaldo scandal.

In a difficult group, Fernando Santos’ team will also play Uruguay and South Korea, while their African opponents will have a tough time progressing to the knockout rounds.

Portugal vs Ghana Tips and Prediction

Recently, one man has dominated headlines both inside and outside of Portugal. Former Manchester United player Ronaldo launched a scathing attack on the team in an interview with Piers Morgan, which could result in him leaving Old Trafford at best or in being fired and sued at worst.

Ronaldo, a five-time Ballon d’Or winner, made an unexpected appearance at a press conference earlier this week to urge that attention be directed toward the football rather than his activities as he frantically tries to assist Portugal finally win the big one after multiple World Cup losses.

Despite being a well-known footballing nation, Portugal has only ever advanced to the World Cup semifinals twice, in 1966 and 2006, and they haven’t advanced past the round of 16 in four of their last five competitions.

The Selecao lost to fellow Group H rivals Uruguay in the round of 16 at the World Cup finals four years ago, and despite thrashing Nigeria 4-0 in a friendly last Thursday, they have only managed a pitiful three victories in their last 11 games.

Santos’s team has struggled to win any of their last three opening games on the biggest international stage, so fast starts have not been a theme for Portugal at the World Cup. Ghana will need to put on their best shooting boots if they hope to get past a Portuguese defense that has only allowed two goals in their last seven games.

Following a brief absence from the World Cup in 2018, Ghana is back where they belong and already has their sights set on sweet vengeance in Group H. Uruguayan villain Luis Suarez has been waiting patiently for 12 years after channeling his inner goalkeeper to keep the Black Stars from making it to the semifinals.

Ghana is getting ready for its fourth World Cup appearance since 2006, and the African nation has only been eliminated at the group stage once before. On December 2, the two sides will resume hostilities.

But that disappointing exit came in their most recent appearance in 2014, where they were eliminated without a victory. Earlier this year, before Otto Addo took over, the Black Stars also lost all three of their games at the Africa Cup of Nations.

Ghana enters the World Cup having won seven of their last eight games across all competitions, keeping clean sheets in all of those victories, and only losing to Brazil during that run. They also impressively defeated Switzerland 2-0 in a friendly last week. Results since the summer have caught people’s attention, though.

At this level of football, Portugal and Ghana are not complete strangers; at the 2014 World Cup, Ronaldo helped the A Selecao defeat the Black Stars, and a similar performance here would help him in his quest to once again generate headlines for the right reasons.

Given Ghana’s recent defensive struggles and abundance of young talent in the final third, this has all the makings of being a tricky opening game for Portugal.

The Selecao supporters shouldn’t expect their team to win easily in Doha, but with so many talented attacking options at their disposal, we still believe Portugal will battle to a close victory and have the best possible start.