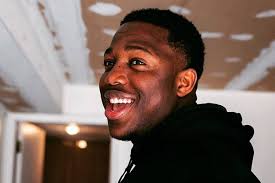 Recently, body cam footage has been released by the police and it was taken in the time of an encounter between police officers and a lowa football player. Actually the officers were looking for a robbery suspect, but they mistakenly caught the football player as the suspect.

The video has been taken on July 20 and it is released on Tuesday and the video shows the officers stop the player in the Benton Hill Park which is located in Lowa city. Police officers enquired the Ekakitie about the robbery and they thought he was the robber.

When the officers were enquired about this incident they said that Ekakitie had some similarities with the robber and that is the main reason for why they suspect and stopped in the park. They mentioned that the robbery was taken place 10 minutes earlier before they caught Ekakitie.

Since he has the description of the suspect, they stopped him for the armed robbery. Actually the news was not released by the officers. But Ekakitie has described this incident in his Facebook profile on the day in which he was encountered.

In that post he mentioned that this was the first time that he got really scared about this life. Added to that he also mentioned when police officers stopped him and enquired about the robbery he got scared. But at the same time, the officers behaved professionally when they realised that he is not the suspect.

This has made many people shocked. Imagine how it will be when you are approached by a team of police officers for a robbery. Many individuals have talked about this and they have also shared this information on their Facebook. In that way, the news got viral and the police officers released the video.

While watching the video, it can be seen that one of the police officers approaching Ekakitie by telling him to raise his hands. At the same time, it can be heard that the officer says “you are not the suspect, but we want to check it”. The video plays for around seven minutes.

Ekakitie has mentioned in his Facebook Post that he was playing Pokemon Go in that public park. He described the moment when four police officers are approaching him with gun. However Ekakitie said though he was scared in that moment, he could understand why police officers checked him.

He also admitted that he didn’t hear what the police officers said. It is because he wore headphones while playing the game and that is the reason why he did not respond to police officers commands. In that video, another police officer said that Ekakitie was using headphones. This will definitely be an unforgettable moment for Ekakitie.