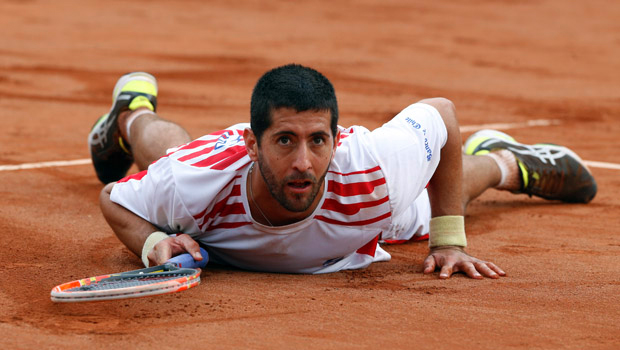 Podlipnik: “The Chilean courts are dying by the mismanagement of the Federation”

The first racket Creole Triunfo detailed diagnosis to the Davis Cup team, which prompted to make public their demands for radical changes in the management of the national “white sport” arrived.

Tennis Federation asked players to express themselves through institutional channels

While the corruption scandal that has erupted in the local football world and generated ongoing interest in the population and making headlines in the media, the Chilean tennis live their own struggle to stay afloat problems .

It is that the Davis Cup team hit the table a few days ago where through a letter made public his diagnosis on the present that crosses the national “white sport”.

Creole major rackets came together to demand radical changes in Chile Tennis Federation, and although at first there was talk of a nuisance for prizes owed by the series against Venezuela and Mexico, the truth is that players are more interested in modifying current statutes governing body inside .

This was recognized by Hans Podlipnik in conversation with Triunfo , ensuring that the issue of outstanding monies have been used as a strategy to divert attention from their demands.

“I think the Federation has diverted the focus of the letter focusing on Davis Cup payments . As a team we believe it is more important to the development of tennis at the national level. The Federation bother with the menu, but we only want the best for tennis, “said the athlete.

And though assume that “money Davis Cup is undoubtedly an income that allows us to travel to our tournaments dignified way and so we gave importance to the letter, we seek primarily the welfare of our activity . “

Regarding this point, revealed that Gonzalo Lama and Juan Carlos Saez met Monday with representatives of the Federation to secure the amounts due, and that also they canceled the prize money ITF (International Tennis Federation), although “we still They are what has not canceled the Municipality of Talcahuano and Banco de Chile “.

When explaining the origin and purpose of the letter signed by Christian Garin , Lama , Sáez , Nicolas Jarry and himself, “H-Pod” argued that it is on behalf of anyone who feels aggrieved by how you are managing tennis in the country.

“The intention of the letter is to be a voice for the thousands of tennis fans who feel powerless by what we are experiencing, but do not have the means to speak out. The goal is to generate a change in the statutes of the Federation and bring transparency and people really qualified . We have to get out of the hole we’re in, “he said.

– Is the current leadership is not qualified?

– The priority of each federation must be massively sport they represent. That was not what happened to our Federation. Every year we have fewer players and the situation in regions is alarming. Tennis is dying for their mismanagement.

In addition, the first national racket targeting avoided Jose Hinzpeter , president of the national court that leave his post next March, as solely responsible for the difficulties being experienced.

It is that Podlipnik is irrelevant that the helmsman leaves office in a short period , because “with the current statutes, it is likely that the situation remains the same, regardless of his departure.”

“We do not publish the letter Hinzpeter, but because we decided to say enough is enough. We want to change this in the bud . And to start it transparently handle need a radical change. “

Finally, the “Polish” referred to the support they have had from various regional leaders, thousands of fans, professional tennis players and personalities of the world of the likes of Fernando Gonzalez and Marcelo Rios .

On these last two, said to have been “a great contribution, are great,” adding that Nicolas Massu, as team captain has helped mediate between them and the federation. “They are three big,” he said.