Playtech casinos offer a promotion with a £ 500,000 prize pool 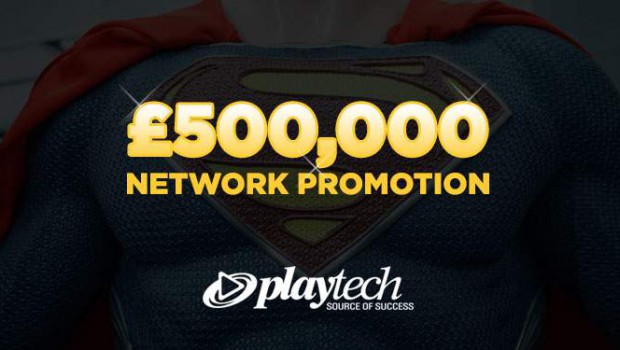 Playtech gives players the opportunity to win a share of the £ 200,000 prize pool with its £ 500,000 promotion that is launched on all of its casinos.

Playtech software provider has launched the biggest promotion in its history, whose prize pool is £ 500,000 across the entire network of casinos it supplies. It will last 28 days and is available for players registered on casinos powered by the developer.

This promotion coincides with the launch of three new titles on Superman. These new superhero themed video slots were inspired by three films, including Superman I, Superman II and Man of Steel. A record number of entries has already been registered, and there is no doubt that this promotion will be a great success with all online betting enthusiasts.

Last year, Playtech had organized a promotion offering a £ 250,000 prize pool to promote the launch of its first series of DC-branded titles, which had been a great success. One can then assume that this new promotion will provoke the same enthusiasm.

Details about the Playtech promotion

This Playtech promotion will consist of four draws that will be made independently. The biggest prize pool, £ 200,000, will be awarded in one of these four draws, and a prize of £ 100,000 will be awarded in each of the other three draws. The promotion will also allow bettors to win £ 5,000 prizes as well as hundreds of small cash prizes to ensure that all players have a chance to win at least one prize.

To have the opportunity to win one of the grand prizes, players must register on a Playtech-powered casino and start playing their favorite games. For each £ 10 bet placed, they will receive a ticket to participate in the draw. Some of the games have been selected specifically for this promotion, and among them are the best Playtech slot machines. These include Superman 1, Superman 2 , Man of Steel, Green Lantern, Space Invaders, Halloween Fortune 2, Buffalo Blitz, Age of Gods and Plenty O ‘Fortune. Players can get as many tickets as possible and win many prizes. Further details are available on all Playtech casinos, so players must make sure to check out.

At the end of this promotion, Playtech will probably launch another one that will coincide with the start of the new football season, but it is too early to talk about it. For now, bettors must make sure to get as many tickets as possible with this £ 500,000 promotion.

Shimon Akad, Managing Director of Playtech, said: “We are delighted to announce our largest casino promotion on a selection of our most popular games. So I would like to thank all our partner operators for their unfailing support and for helping to make this the biggest promotion ever. ”

He also said, “Every year we offer more than 50 new entertaining titles that integrate a multitude of innovative features into many regulated markets. No other developer can launch games at this pace and offer such quality, as well as a range of games as diverse as innovative. We have meticulously programmed the games released the last nine months, and we have strategically coupled them with wonderful marketing promotions. Once again, I am proud to say that our team has created outstanding titles. We are already looking forward to offering our next promotion. “