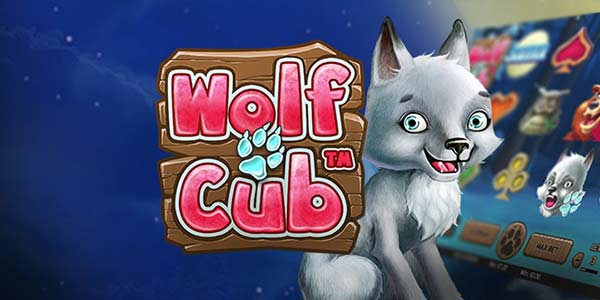 Wolf Cub is a 5 reel and 25 payline slot from NetEnt. Featuring a cute wolf cub and other animals from the forest, the game, with its bright and cartoon style graphics and animations, has a night time winter theme. In this slot, you can score up to 115 Free Spins and boost your winning chances further with the Blizzard feature.

This video slot has a slightly majestic atmosphere with snowflakes slowly fluttering down onto the forest floor behind the reels. The wolf cubs are the highest paying symbol. That said, the other animals on the reels include owls, snow leopards, bears and moose. Aside from the wolf cub, the most valuable symbol in the game is the Wild symbol (the wolf paw). In addition to substituting for all other symbols except the scatter, the wild can give you up to 100 times your stake if you land 5 on a payline.

As for the scatter (the full moon), if you land 3 or more anywhere on the reels at the same time, you’ll trigger the Free Spins feature, where you can win up to 115 Free Spins! Plus, during the Free Spins feature, the Blizzard feature activates. It comes into play when a symbol lands fully stacked on the 1st reel, taking over the whole reel. All instances of this same symbol that appear on other reels will spread toward the 1st reel to give you more of the same symbol, boosting your winning chances.

If you’re lucky enough to score high value symbols during the Blizzard feature, you will howl with joy at your good fortune!