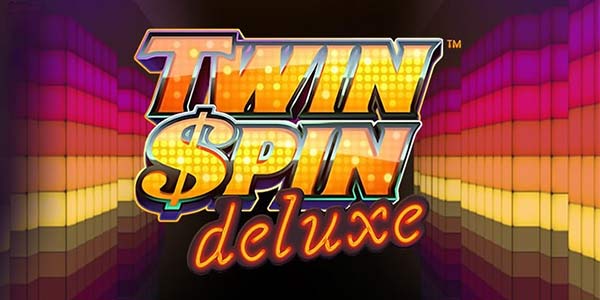 A 6-reels, Cluster Pays slot from NetEnt, Twin Spin Deluxe is a new twist on the original Twin Spin classic! Now, instead of feeling like you’re in a lounge bar as you spin the reels, the new electronic theme will have you’ll feeling more like you’re at an 80’s arcade. Also, unlike the original, the deluxe version has 6 reels and 5 rows instead of five reels and 3 rows.

What’s more, with no paylines, you’ll need to match symbols in clusters of 9 on the Twin Spin Deluxe layout to score wins. Plus, if you’re lucky enough to get 30 glittering diamonds, you can score the game’s 10,000 coin jackpot!

The neon colors and the electronic music add to the overall theme and thrill of this slot’s experience. Symbols that decorate the reels include traditional fruit machine symbols like gold bars and red sevens. You’ll also find blue diamonds as well as gold bells and traditional playing card symbols.

If you match up any 9 of these same symbols in a row, either horizontally or vertically, you’ll receive a payout. As previously mentioned, diamonds are the highest paying symbol and if you manage to spin 30 of them, covering all the reels, you’ll score the highest payout: 10,000 coins.

One of the best features of the game is the special twin reels feature. This feature activates when two adjacent reels synch up at the start of a turn. During this feature, identical reels spin together. The identical symbols on the reels are linked as they spin together. They can also expand up to 6 reels all linked together, covering all the game’s reels. These linked reels can appear randomly on the screen anywhere and allow for many ways to win!