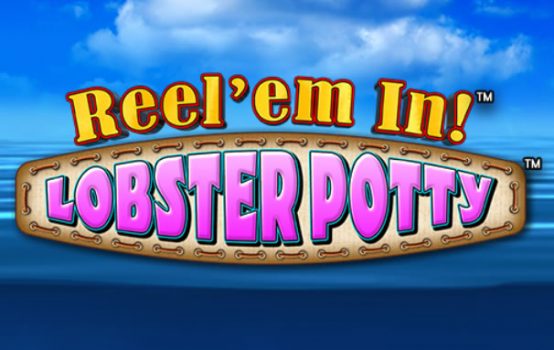 Cast your line and catch a big win with Reel’em In! Lobster Potty. This 5 reel and 20 payline game is an ocean of fun with a Big Bet game and 4 exciting bonus features including Reel Em In, Lobster Pots, Big Bite and Mega Bite bonuses.

This light-hearted and humorously themed game is bright and colourful in its design and can be played in both landscape and portrait mode. The reels include various images of fish and  are set against a blue backdrop to make it appear as though the reels are in the ocean. Above the reels there is a fisherman in a boat, with his fishing line cast in the water ready to catch something good.

The fun starts when you trigger one of the bonus features. The Reel Em In Bonus feature is activated when 5 sandy backgrounds appear on all 5 reels. Once triggered, reels from 1 to 5 can become active and contain cash values, blanks and boot symbols. The boot symbol will shut down the reel. All reels will remain active until they are shut down. Once the feature is over, the total value is tallied and awarded.

The Lobster Pots Bonus feature is triggered in the same way as Reel Em In. In this feature, only the centre reel will spin. Once it stops it will highlight 1 of 3 lobsters: Gold, Silver, or Bronze. The pot that is associated with the lobster will be won.

If you want to wrap your claws around even more winning chances, you can play in Big Bet mode. In this mode, you can increase your bet to get a series of 5 linked spins with some exciting extras. Among these extras include additional wilds added to reels 3, 4 and 5. There is also a Big Bite Bonus feature, during which a shark adds 2x multiplier wilds to the reels as well as a Mega Bite Bonus feature where more wilds are added that are linked to 2x, 3x, 4x, 5x and even 10x multipliers!