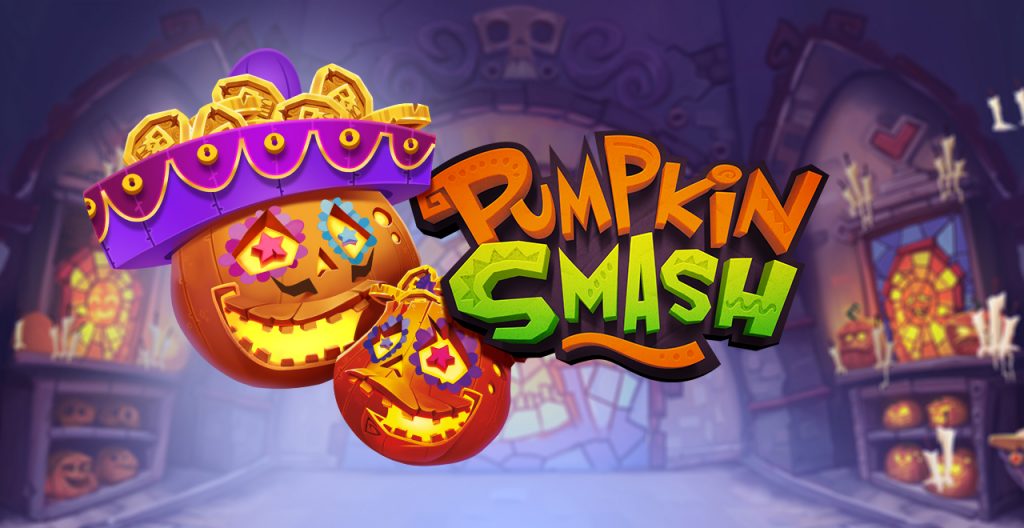 Pumpkin Smash is a 5-reel and 20-payline slot from Yggdrasil Gaming that is a fiesta of fun. This Day of the Dead-themed slot is anything but spooky. On the contrary, it is a colorful party of thrills that gives you the chance to spin for some amazing rewards like free spins, multipliers and cash prizes up to 875 times your stake! Best of all, your chance to win all of these great rewards comes from smashing pumpkins!

The sharp and bright graphics of Pumpkin Smash are what you’d expect from Yggdrasil, which is well known for its incredible visuals and sounds. Based on the Day of the Dead holiday celebrated every year in Mexico, the symbols on the reels include four differently colored pumpkin sugar skull symbols (high-value symbols) and playing card suit symbols: hearts, diamonds, clubs and spades (low-value symbols).

The main bonus feature in this video slot is the Pumpkin Smash Bonus. It can be triggered in both the base game and during the Free Spins feature. To activate the bonus in the base game, you’ll need to land between 2 and 5 bonus symbols anywhere on the reels. From there, you will smash the number of bonus pumpkins you landed. Each pumpkin will reward you with 2 to 20 prizes.

For instance, these rewards could include access to the Free Spins feature where you can get anywhere from 7 to 30 free spins. You could also be awarded with a multiplier between 2x and 7x applied to 1 single symbol, which will payout handsomely if it is part of a win. Finally, you could get anywhere from 2 and 375 times your stake as a cash prize.

If you manage to get the Free Spins feature, landing 1 to 5 bonus symbols will activate the Pumpkin Smash Bonus feature during the Free Spins round. This will give you the chance to smash between 1 and 5 pumpkins where you can get between 2 and 10 prizes each. The prizes are identical to the ones that you can win when the bonus is triggered in the base game. The only real difference is that when the Pumpkin Smash Bonus is activated during the Free Spins feature, you can win up to 16 free spins each time, and cash prizes can be as high as 875 times your bet!

There are lots of chances for you to smash your way to big fun and rewards in this slot!