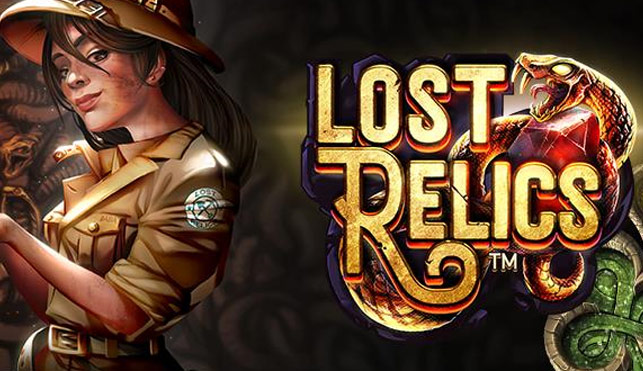 Another exciting Cluster Pays video slot from NetEnt, Lost Relics sends you on an archaeological quest to dig up ancient treasures. During your journey, you can trigger any of the game’s multiple bonus features. Among these include the thrilling Free Spins feature where you can open treasure chests that contain sticky wilds, cash prizes or extra free spins!

If you’re a fan of tomb raider-style themes and stories, Lost Relics will certainly be up your alley! The stone reels are decorated with symbols that range from daggers. Bracelets, Roman helmets and snakes coiled around rubies, to the four card suits – hearts, diamonds, spades and clubs.

A cluster of 6 or more symbols that are vertically or horizontally adjacent to the same symbol will results in a win. If you’re lucky enough to get 25 of the snake ruby symbols or the bracelet symbols covering the grid, you’ll score 1,000x your stake!

What makes this game particularly fun is that there are 3 special features that can be randomly triggered when you achieve a winning spin. These features include:

Extra Wild feature – 3 additional wilds are placed at random on the reels in positions not a part of the winning cluster, giving you the chance to get extra wins.

Extra Scatter feature – 1 of the symbols that is part of the winning clusters provides an extra scatter.

Coin Win feature – 1 of the symbols that is a part of the winning cluster will award a cash prize of anywhere between 3 and 30x your stake.

What’s more, each of these features can randomly occur up to 5 times following a win, meaning even bigger and better winning chances.

If you get scatter symbols on reels 1, 3 and 5 at the same time, you’ll activate the Free Spins feature and be awarded with 10 Free Spins. Plus, there’s a chance that scatters can appear anywhere in a winning cluster if the Extra Scatter feature is active, which further boosts your chances of triggering the Free Spins feature.

What makes the Free Spins feature in Lost Relic particularly exciting is it comes with a Hidden Chest feature, where a treasure chest occupies multiple spaces and is hidden behind reels at random. Hidden chests can be revealed under winning clusters. There are small, medium and large chests. The chests contain rewards including extra free spins, sticky wilds (these are randomly placed on the reels for the duration of the feature), and coin wins (get a cash bonus up to 30x your stake).

Ready to uncover all the winning treasure in this game?