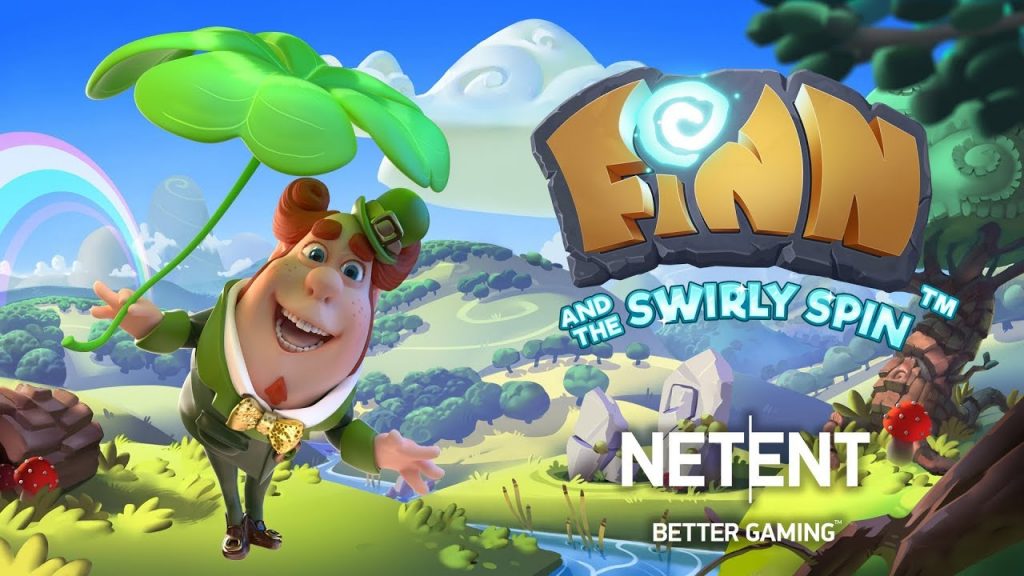 Finn and the Swirly Spin is another fun, colourful and visual masterpiece form NetEnt. It has been creatively designed and has several special delights including random features and multiple free spins features, giving you lots of winning chances as well as potential wins of up to 50,000 coins! This magical Irish-themed slot delivers a swirl of thrills and rewards.

Finn and the Swirly Spin breaks away from the traditional 3×5 spinning reel slot layout. Instead, this cluster pays slot sports a 5×5 game grid and each time you start a new play, the previous symbols on the grid will disappear and be replaced by new symbols. These new symbols pop-up in a spiral pattern (or a “swirly spin”), starting from the left bottom corner to the centre of the game window.

A golden key is always the first symbol to appear at the beginning of the spin. Other symbols include: horseshoes, acorns, four-leaf clovers, rubies, hearts and spades. Your objective is to move the key along the swirl to the keyhole in the centre of the vault. If you manage to do this, you’ll unlock special features!

To move the key along the path, your spin will need to result in a win. This is achieved when at least 3 of the same symbols result adjacent, vertically or horizontally. The combination will explode, leaving empty spaces. This allows other symbols, including the key, to move along the path, while their former spots are replaced with an avalanche of new symbols.

What’s more, an exploding winning combo will leave behind a star (Wild) symbol, which will also progress along with the other symbols. If the wild symbol leads to a winning combo, it will explode and so will the symbols that are horizontally and vertically adjacent to the combo. This will continue until no more winning combos are achieved or if the key unlocks the vault.

The video slot has 4 random features. One of the features will activate at random once symbols have come to a stop on the spin. Finn, who is usually off to the side of the symbols playing his flute, will stop playing and activate one of the features:

Starfall Wilds – 2 Wilds are randomly place on any position, with the exception of the key symbol. If no win results, more Wilds will be added until a win occurs.

Dragon Destroy – A random number of symbols are destroyed and another avalanche is activated to potentially produce a winning combo.

Irish Luck – A horizontal or vertical line is transformed to display the same symbol, so a minimum of one win is guaranteed for the spin.

Magic Transform – All spade and heart symbols are turned into high-value symbols so the potential for bigger wins is higher.

If the key unlocks the vault, the Free Spins feature will be triggered. You’ll fly off with Finn into the bonus feature land where you will be able to activate 1 of 4 free spins features. The one you trigger, depends on the number of keys you’ve collected.  Each feature awards a different number of free spins as well as 1 of the 4 random features. For instance, the Lava Lair Free Spins Feature requires 4 keys and awards 3 Free Spin and the Dragon Destroy feature.

Get lost in a swirl of magical rewards!