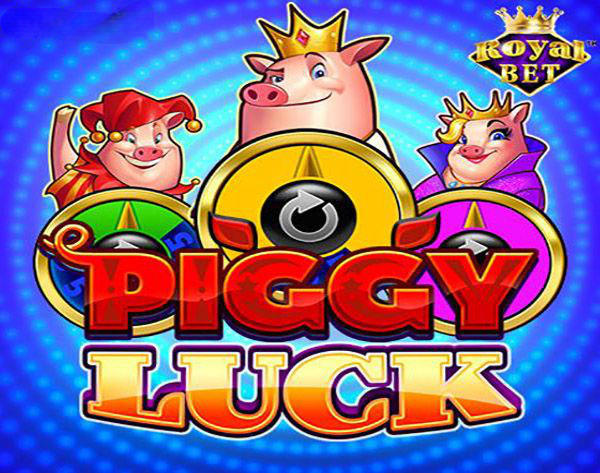 Anywhere you hear pig, it all means high class living in the online games world. However, Piggy Luck is nothing near that and is more of flashy colors. It is brought to you in a simple setting to bring out a positive attitude. On a lower note, a few rounds into it brought disappointment. Gamers attain a 5*3 grid matrix, an attractive logo at the bottom, and three pigs.

To pull away the players’ attention from the lack of graphic cues, this slot has a high hit rate of 49.19%, so almost every second rotation will be winning. It is a low volatile game with 95.12% and 58.62 set aside for the base play while the rest goes to the attributes.

You can take part in Piggy Luck on any gadget while its bet choices are 20 p/c – 25 Euros for each spin.

The game uses only six icons creating wins every time matching tiles fall on any of the twenty pay lines. Starting from the left of the panel. The three lesser pay icons are Q, K, and A, and the higher-paying ones are diamonds and stars.

Three Piggy characters are shown on top of reels to stand for triggerable attributes in the game.

Additionally, gamers can trigger the wheel of luck attribute to stake their path to the three additional spins.

To activate the Golden path attribute, you must land three piggy king icons on 2,3, and 4 reels. An awards ladder shows up as well as a six-segment wheel with numbers 1-6 on every segment. The wheel rotates, showing participants the number of steps as they advance along the awards ladder.

There are 3 Piggy Queen icons at sight on the reels 3,4, and 5 awarding 15 free rotations. While the attribute is triggered, landing three piggy queen icons reactivates an extra plus 15 rounds. That’s everything you have for the free spins play.

Hitting three piggy joker icons on the1,2 and 3 reels activates the cash collect attribute. At this juncture, twenty coins are put on the display. Gamers collect them one after another to show multipliers of the stake. The feature ends once a collected coin shows a cash amount and a tick. Then awarding of the total of the entire multipliers is prized.

Above the grid at the base play are three wheels, where each corresponds to the free rounds.

Every wheel bears two segments – an activating region and a non-attribute region. Gamers gather the Joker, Piggy Queen, and King icons to widen the respective activation region on the wheel. You can rotate each wheel for a price of 10 times the stake. The attribute will start when the wheel pointer stops at the wheel’s activation region; the feature will start. Fill in the trigger area to automatically start the feature.

Look out for the wolf’s paw icon. The icon readjusts the activation region of the wheel it falls below.

Piggy Luck seemed to be somehow bright fun. However, this thought quickly drowned in a moment.

As seen in the games sheet, you can infinitely reactivate free rounds, which is frightening.

There is no point in Cash Collect since you are aware you will achieve something little. Get to the maximum cash collect by picking all coins, and you will be gazing at an award of 39 times the stake.

Lastly is the Golden Path, which has an excellent maximum prize. Something isn’t right if you do the calculations.

There are 36  steps on the ladder, but when summing all numbers on the wheel, the total gets to 21.

Maybe filling the ‘Golden Path meter’ at the base play assists gamers in moving ahead. Nonetheless, this is not in the demo’s functioning.

Piggy Luck feels like driving a car on a straight path, but it begins moving backward! That’s the sense when playing Piggy.