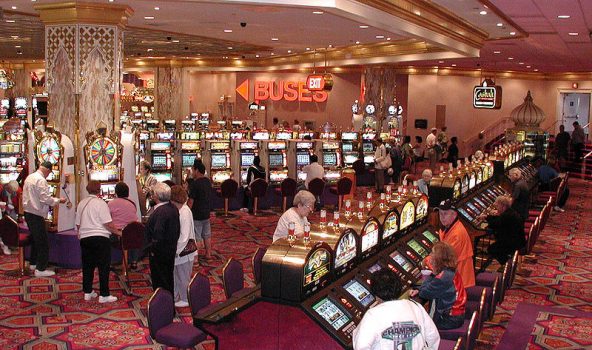 Online casino gaming has only existed in the state of New Jersey since 2013, but it’s already a significant part of the state’s lucrative gambling industry, pulling in revenues that continue to grow year-on-year.

In 2018 alone, the months of March, July and September saw a collective online casino gaming revenue of over $25 million. When compared to revenue in 2017, the monthly growth this year has hit the double-digit percentages. In contrast, land-based casinos in Atlantic City collectively pulled in under $20 million per month, leaving some analysts and casino experts questioning whether online gaming hinders the growth of brick-and-mortar casinos rather than help.

Are New Jersey casinos in decline?

The Atlantic City casino industry suffered a significant blowback in 2016 when a total of five big casinos, including the Trump Taj Mahal, the Atlantic Club Casino Hotel and the Trump Plaza, closed their doors and tables in the period leading up to it. During that same period, casino gaming online grew at a rate of 62.5 percent. As a result, land-based casinos may well receive a surge in profit from their online operations. However, there’s the distinct possibility that such measures “cannibalize” revenue from their other operations.

Steve Norton, a former Atlantic City casino executive and industry consultant, believes this “once-healthy” industry is at risk from the success of online gaming, which is likely to reduce “attendance at our casinos.” Because of this, “operational downsizing” could, in turn, lead to job loss, bankruptcies and reduced earnings and dividends for the casinos.

As if the competition existing casinos receive from the online sector isn’t enough, two brand-new integrated resorts recently opened in Atlantic City: the Hard Rock Hotel & Casino and the Ocean Resort Casino. The fight to generate more land-based casino and non-gaming revenue for all the establishments in the state is now harder than ever. Interestingly, the total year-over-year gaming revenue in September 2018 was down for six out of the nine Atlantic City casinos still operating.

Wayne Schaffel, another Atlantic City casino industry insider, predicts that as revenue figures across the state continue to drop, New Jersey is likely to further expand the already profitable iGaming sector (including casino gaming and sports betting) over the next decade, further undermining “brick-and-mortar casinos, leading to a spate of closures.”

The Appeal of Online Gaming

Based on global statistics, online casino gaming platforms appeal to a much broader demographic than traditional, brick-and-mortar casinos, and this is also applicable to players in the New Jersey jurisdiction. Online casinos and poker rooms offer a relatively anonymous and nonjudgmental arena in which to play, therefore, appealing to female gamers and those belonging to minority groups who may not feel comfortable in a crowded casino. Factor in the prolific number of money-saving bonus codes available on online platforms, and you have a relatively inexpensive way to start playing casino games when compared to a traditional casino.

Online casino gaming isn’t only restricted to desktops and PCs, as mobile plays a significant part in the continued success of the sector. Mobile casinos and individual apps can be quickly and easily downloaded onto smartphones and tablets, ensuring that players have their favorite games at their fingertips. Also, online casinos are always open, and they bring the games to the customer 24/7, 365 days per year.

Schaffel and Norton may unite in the opinion that New Jersey has “no real way to ever recoup the shortfall” that would arise from further casino closures. However, not all the experts in Atlantic City agree. Steve Ruddock, the lead analyst at PlayNJ.com, believes the idea of the online casino sector cannibalizing the rest of the industry is more hyperbole than reality. Stating that concerns are overblown, he is of the opinion that online casino gaming “hasn’t negatively impacted visitation or customer spending,” especially since there is five years’ worth of statistics “suggesting it’s beneficial across the board.”

The Golden Nugget Atlantic City Casino is also a testament to this countertheory, which is currently the leading casino for online gaming in New Jersey, having raked in over $227 million so far in online revenue. This land-based casino’s online efforts have succeeded in generating additional revenue and developing brand awareness with a younger customer market. Thomas Winter, the casino’s general manager of online gaming and senior VP confirms that “the growth of internet gaming came along with a big growth at our land-based business.”

The jury’s still out as to the long-term effects of online casino activities on the growth of Atlantic City, especially since this tourist hot spot relies as much on footfall as it does gaming revenue. However, online casino gaming isn’t likely to slow down anytime soon, as the figures released for October’s revenue show that it had yet another successful month — a trend that the remaining two months of 2018 will no doubt follow.