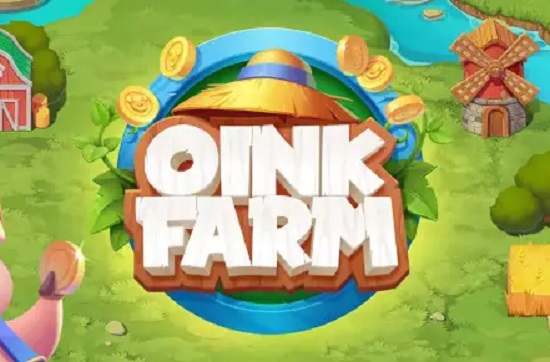 Foxium, a Microgaming partner studio, has created an online slot called Oink Farm. Farming may be strenuous in the real world, but it appears to be very pleasant in the slot world. It’s in Oink Farm, which offers Oink Coin collections, Wild Reels, free spins, and Eggs Rush jackpots while presenting a joyful, animated portrayal of agriculture.

This innocent-looking game appears to be set in a fantasy farm where cheerful animals live long, happy lives bounding over hills covered in thick mossy grass, while the farmer spends his time whittling wood and strumming a banjo. The only thing that might disturb the agricultural calm is the noise the reels make when they stop spinning, which sounds like a crackling vinyl record.

Oink Farm’s shenanigans take place on a 5-reel grid matrix with 4 rows of symbols and 20 paylines – in other words, a very standard layout. Wins are made when three, four, or five matching symbols land across a payline, starting from the leftmost reel, in this medium volatility slot. The game comes in a range of RTP settings, as is customary these days, so opt for the 96.23 percent version if you want the best. The win percentage isn’t particularly unusual though, coming in at 25.8%, with stake limits ranging from 20p to £/€50 each play.

When you look at the paytable, you’ll notice that there are 10 normal paying symbols. Half are 10-A card ranks, with five-of-a-kind values ranging from 1.5 to 3 times the stake. When five higher-value carrots, cabbages, chickens, sheep, or foxes are landed, the payout size increases to 5-12.5x the bet. The farmer piggy wild symbol completes the picture. Wilds appear on all reels and can replace any symbols except scatters and Oink Coins. A win of 20 times the bet is awarded when five wilds appear on a payline.

Oink Farm’s maximum win, like many other games from the Microgaming circle of studios at the moment, is most likely to come from its jackpot feature. Oink Coin collection, Wild Reels, and free spins round up the jackpots.

On top of each of Oink Farm’s five reels is a Coin Meter. Oink Coin symbols appear on the reels and are added to the Coin Meter above. When three Oink Coins are collected in a Coin Meter, the Wild Reel function is activated on that specific reel. When altering the stake, the Coin Meters are saved at their current level.

When this function is activated, all positions on the reel go wild. This lasts for three spins in the base game, after which the wild is withdrawn from the game grid. Scatter symbols remain visible through any Wild Reel, and Wild Reels replace for any pay sign.

Windmill scatter symbols occur on reels 2, 3, and 4, and three of them on the same game earn 10 free spins. When a Wild Reel is formed during the bonus round by collecting three Oink Coins in a Coin Meter, it stays on the grid until the free spins are over. Any scatter that lands offers an additional +2 free spins, allowing you to extend the bonus round.

Though jackpots have occurred in games like Gods of Seas: Triton’s Fortune and the one-line extravaganza Foxpot, Foxium is a developer that hasn’t used them frequently in the past. Add another game to the list, as Oink Farm offers eager players another chance to win a non-progressive jackpot of a reasonable size. Though the sparkling group of creatures adds a touch of life, Oink Farm isn’t exactly the most exciting way to do so.

Oink Farm is serviceable and will certainly appeal to casual gamers, but it lacks the inventiveness that Foxium has demonstrated in the past. Wild Reels may assist to up the stakes in what is a mediocre jackpot game amidst a glut of similarly levelled jackpot games.