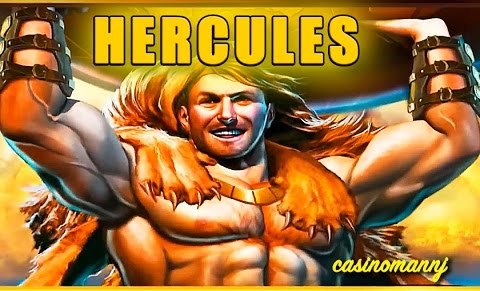 The year 2017 begins in style with the brand new Hercules slot machine: Pragmatic’s Son of Zeus. It is one of the best developers in the online gaming industry.

Begin the year with the new Hercules: Son of Zeus slot machine, featuring one of the heroes of ancient Greece (Hercules), who is looking forward to many prices. This 50-payline video slot offers a lot of excitement with prizes of up to 40,000 coins when you manage to get two or more Hercules symbols. The bonus part of free spins increases your winnings with additional jokers added during each spin, and you can expect to get an unlimited number of free spins.

The joker is represented by the Temple of Zeus, and the latter appears on all the reels to substitute for other icons, with the exception of the scatter symbol which is illustrated by the icon of the coin marked Zeus. The latter appears only on the second, third and fourth rolls, and when three such symbols appear during a rotation, you activate the free spins part. During this game, you will be entitled to 6 free spins, and all winnings will be multiplied by 2. In addition, before each spin you will have a joker on the second, third and fourth rolls and the three jokers will remain frozen on the spot during the entire free spins bonus game. At the same time, each scatter symbol that appears gives you an additional free spin.

The software provider Pragmatic Play specializes in the design of innovative and interesting online games that are accessible from mobile and PC. Currently, its library is composed of more than 150 titles available in several languages ​​and accepting many currencies. The game is now available on the best online casinos powered by Pragmatic Play.

We recommend that you play Rich Casino, a Curacao accredited betting site where all gaming enthusiasts are registered. Its primary objective is to offer players many excellent entertainment options in an environment where fairness and Safety. Thus, players will enjoy an experience like no other. Pragmatic Play was also nominated for the 2017 Casino Content Supplier Award at the Nordic Game Awards held at the Corinthia Hotel in Malta on 17 January.