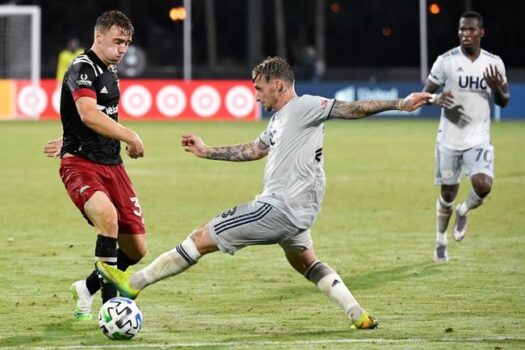 The betting review has all the major input to assist you. After getting the detail of head to head, latest performance, statistics, prediction, betting tips and odds, you will be able to find the best side from two ones. New England and D.C United are going to face each other on 19th August. I am here to assist you till the end of the task.

New England has played in 6 games to remain undefeated in 5 games. At the same time, the remaining game did not show any result. We have seen a tremendous performance by New England. They did not fail in a single game. If we talk about the DC United, they also took part in 6 games to remain undefeated in 3 matches. The two games did not provide any result and one loss from the opposition.

Both the side had met to each other in April 2021. The New England showed an outstanding performance to defeat the opposition by 1-0 goals. But, it is a new time, and all the players are ready to change the result.

There is a lot of difference between the two sides of the game. New England has a 66% chance to win the game compared to 14% of the opposition. It means that New England is ready to win one more time.

If we talk about the home games, New England had played nine games to win 7. They scored 16 goals and conceded nine only. The DC United also played 11 games at home and remained well in 2 games. They posted 15 goals and conceded 21 goals.

The official squads from New England and DC United will announce before the start of the game. Let’s see what is going to happen in the final XI of the day.

New England will enter into the ground with an 8/13 price versus the DC United of 9/2. The other numbers did not favor any one of 29/10. You may compare all the facts and figures to any other official spots. We made it on behalf of the past facts and figures.

I have checked the latest performance of the two sides. Both the playing XI did goals in the last three games.

According to the latest news and performance, New England will win the game. We picked this decision by knowing the head to head result and the last outcome between the two sides.

I hope you have picked the right information about the two best sides in the US Major Soccer League. No doubt, we have announced that New England has a 70% chance to win the game. The official result will come after the end of the game. It would help if you stayed away from all the scammers. The best predictor is those who like to make their prediction.