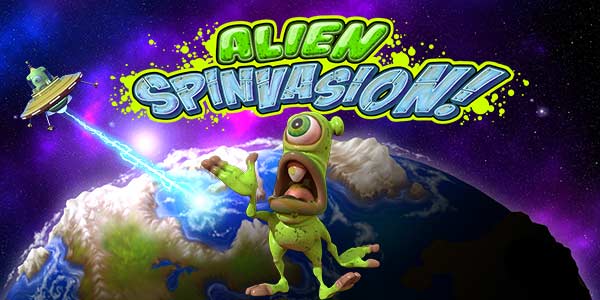 The software developer Rival Gaming has once again managed to impress his many fans with the launch of the video slot Alien Spinvasion.

Rival software developer enthusiasts can now help save the world from an invasion of the Alien Spinvasion slot machine. This game is available in both download and instant versions and is available on several platforms, including PCs and mobile devices.

The new Alien Spinvasion slot brings players to an alien invasion, a theme that is used as a script for several science fiction movies. The main objective here is to protect the planet earth against an invasion of aliens, and among the icons you will see during your session are laser pistols, alien eggs, a meteorite, a rocket and Symbols of poker cards ranging from 9 to the Ace. With dazzling graphics and excellent sound effects, Rival has added a personal touch to ensure an unforgettable experience on this 5-reel, 50-payline entertainment option.

The alien symbol acts as a joker sticky on this title. It remains in position during the rotations until the formation of a winning combination, which greatly increases the capital of the players. The Army General icon represents the scatter symbol and triggers a free spin game when you get it at least three times on the reels. This general controls this part closely, monitoring the appearance of an alien spacecraft on the reels. As soon as the part of free spins is activated, everything changes, because the symbols become “Drop Icons”. Thus, whenever winning combinations are formed, you witness the fall of the symbols that were part of it, which are replaced by other icons, which can offer you additional gains.

The Rival Gaming software vendor informs players that they must prepare for an unparalleled experience on the new Alien Spinvasion slot machine. The latter was made available on all the best casinos that it feeds on March 13, 2017. The launch of this production will surely have been celebrated with several excellent offers, including free bonuses and free spins.

Vanguards Casino is one of the best establishments on which you can go to enjoy this title. Indeed, the site currently offers an incredible free bonus without deposit of 20 €. We recommend that you create an account today to enjoy this 20 € incentive that you can use on any game of your choice. This bonus is also followed by an impressive match of 100% to 500 € which rewards new members making their first deposit.

This generous no deposit bonus can be used on any slot machine and is reserved exclusively for new members. However, free money cannot be used to play certain games such as baccarat, red dog, roulette, Progressive Jackpot titles and craps.

Vanguards Casino has a wide range of slot machines. This platform is one of the most popular, and many players enjoy it. The fact that the site offers a wide selection of Rival games makes it one of the favorite destinations of several online game enthusiasts. With the added bonus of € 20, players have a vested interest in rival Alien Spinvasion Video Slot.