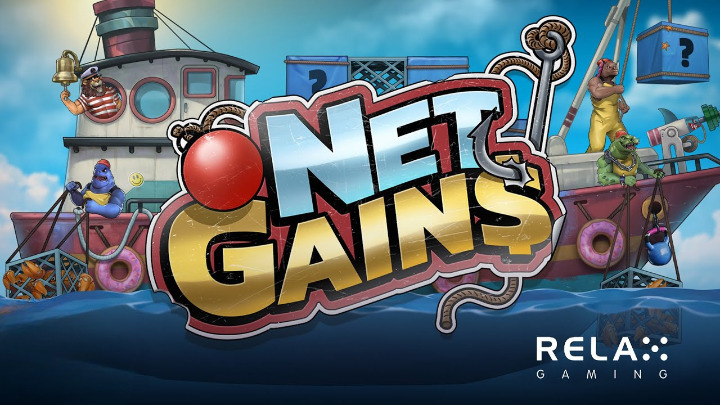 After a partnership with casino streaming, the Relax Gaming studios came up with the Net Gains slot. The slot has anthropomorphic animals moving from Venice beach to the high seas in search of treasures. Net Gains can make a player win more due to its features. It’s perfect for those who don’t like slots like Fishin’ Frenzy or Big Nass Bonanza. What’s good about this slot?

Net Gains takes place offshore, and the set includes boats popping up in the water. The soundtrack is also good and puts players in the right gaming mood. The characters in this slot are the lion and his buds, like the croc, rhino, and shark, which are interested in sea life. However, this slot’s vibe and look differ from that of Iron Bank and Beast Mode, as it’s not as visually appealing as the previous slots. But the audiovisuals presentation is great and up to standard. It creates a positive vibe that makes the less attractive visuals not a concern while gaming. The casino streamer calls out the’ ding dong’ catchphrase whenever a player clicks the bell at the top left corner.

Net Gains is a highly volatile slot with a 5 out of 5 rating. To play, a player has to bet with 10 p/c to 60 euros per spin. The slot also has other ways to play, like activating the special bet, which increases the spin cost by 20% and increases the chances of triggering the bonus round by 82%. Additionally, a player can use the buy bonus feature to play this slot at the cost of 100x the bet.

Net Gains takes place on a grid with five reels and four rows with 4096 ways to win. To win, a player has to have matching symbols from the leftmost reel to the consecutive reels. It has an RTP of 96.5%  during the feature buy, but this can reduce to 96.1% when playing a regular game. Furthermore, a player has to form a winning way with at least three of a kind.

The low pay symbols are 10-A card symbols worth 0.6-1.2x the bet for a six-of-a-kind. The high pay symbols are the chests, octopi, crabs, lion, and liquor bottles worth 2 to 25x the bet. When the winning ways hit the grid, they are removed and replaced by other cascade symbols. However, after the symbols drop, the cascade process repeats. Net Gains also has shark wilds which appear on the 2nd to 6th reels. The shark wilds can substitute all regular pay symbols to complete the winning ways.

To trigger free spins, a player has to collect three scatter symbols after choosing from the three available options. The options include the sticky mystery free spins, coin collection free spins, and stacked wilds free spins. If an extra spins symbol land in any of the three options, a player gets +2 more free spins. However, the symbols are removed from the grid after the others are destroyed. Moreover, the hot mode can trigger randomly at the beginning of the bonus round, increasing the chances of hitting something bigger.

Below is an in-depth explanation of three free spins options:

This feature activates when there are eight free spins, and it can make coin symbols with multiplier values within the set ranges to land. The bet multiplier values include bronze (1x-40x), silver (3x-100x) and gold (10x-2500x). The collector symbol may land on the rightmost reel on the first spin or cascades. Hitting the collector symbols and coins simultaneously makes players get their total value.

The persistent collector can land on every spin and remain at the bottom of the grid until it ends while collecting the coins. Additionally, a player gets +5 free spins when the persistent collector lands. However, when four or more coins hit, and no collectors are in view, they are removed, and their values are collected and stored. The stored amount gets awarded to the player if the collector symbol lands on a yet-to-be cascade on the same spin.

The coins that land increases by +1 to a meter. But if the meter gets to 10, it awards an additional free spin while the ranges for every coin type increase. However, the coins ranges don’t increase after five collections are complete. Instead, a player gets an additional free spin. A coin rain can also happen to make ten coins of the same type land on the reel.

The Net Gains is a simple slot to understand despite having a lot of features that look complex. It entails different game phases like the cascade wins, which turn into mystery symbols when they hit. Additionally, finding the bomb mystery symbol seems to take a lot of work. This can be because the Net Gains is the developer’s 3rd slot from the developer, so the casinogrounds hook-up didn’t pick up well like on the first two slots. Such can also be attributed to the poor graphics and the changed back story, which initially was about a bank robbery or hanging out in the cultural melting pot.

Despite all these, Net Gains also has positive sides, which makes it a worthy game. The multiple bonus rounds enable players to choose between the three options having better chances of winning. The three options also have good win potentials as the screen is full of wilds or mystery symbols.

The coin collection round is also a plus for this slot despite the money symbol collect mechanic feature being common in most fishing slots. The introduction of the money symbol collection can be in a bid to make its fans comfortable when playing this slot without having to look for an alternative slot with such a feature. The maximum win of the Net Gains is 15,000x the bet, which is an increase from the previous slots.

After going through this slot, it’s evident it’s a highly entertaining game every player should try. Its attractive features also make it worth your time and money. But it might not meet the ranks of the previous slots despite having a fun and entertaining soundtrack.