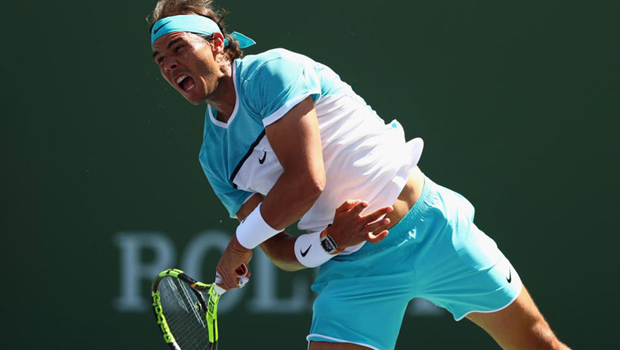 The improvement of Rafael Nadal in Indian Wells left the service Kei Nishikori signed ante 88% of first serve and 81% Novak Djokovic – A weapon that had become a problem for the Spanish in the last 14 months of competition . “Anxiety not let me play. I took to the track with feelings of fear of failure. Not to lose but not to play. He went out with that uncertainty and it was not a tennis theme , ” admitted Nadal during the last campaign who stayed for the first time in 11 years without adding a Grand Slam or Masters 1,000.A study of the Top8 ATP ranking throughout 2015 and the first two months of 2016 reflects the problems of 14 major champion at the time of coping maximum pressure on the serve. While the first eight show a total average of 79% of games in their favor when they have had to face a 30-30 Nadal stays at 71%. Far from the 86 of Roger Federer, the best in statistics.The Spaniard, who will have the help of his uncle Toni in Key Biscayne, is next to last in the standings to handle the situation of break point against the service with 45% effectiveness to save the game, just ahead of Tomas Berdych, with 44. Federer is again the best to get ahead 30-40 with 58% accuracy. The average of the first eight is 52%. And only Nadal and Berdych did not reach 50%. The worst in close games on serve with a lead of 40-30 are Kei Nishikori and David Ferrer. The best, in this case, is Novak Djokovic with 97% effectiveness.A Nadal saved him last year to ease the return because he won 31% of games the rest, behind Djokovic and Ferrer (34). The Spaniard also appears to return a third break immediately after, only surpassed by Nole and Ferru said.Federer’s returnNadal prepares since Tuesday Mia’mi for the debut single morning. Djokovic and Federer, meanwhile, debuts today against Kyle Edmund and Juan Martin Del Potro, respectively. Swiss means the return to competition after an arthroscopy on the knee that forced him to fade from the Open 500 Rotterdam and Dubai, in addition to Indian Wells. “It’s very exciting to face Juan Martin, always give good games in recent years,” he said.The last time the sides was in the Masters Cup in 2013. Since then, the absence of Argentina as a result of its operations on both wrists were have prevented the encounter between two players who played in the final of the US Open in 2009 with victory of Delp. Djokovic, after meeting with Billie Jean King and Chris Evert, has definitively shelved statements Sunday where demanded more money for the man to have more spectators in the stands. Highlights of the day and Carballés Carreño defeats.