Monopoly Bring the House Down

Monopoly Bring the House Down 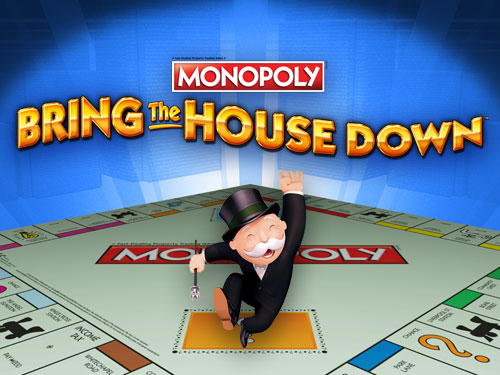 Another fantastic Monopoly slot has hit the iGaming scene and, like its predecessors, it promises thrills, a unique experience and the chance to win some pretty big payouts!

Monopoly Bring the House Down is a 5-reel, 3-row and 40-payline slot based on the famous board game brand. What makes this particular instalment of the Monopoly slot series stand out is its Hot Zones, which can award Hot Zone Wilds that can transform into Hotels with multipliers up to 5x! What’s more, there are 3 randomly triggered base game features and the traditional Big Bet feature.

The game is very attractive visually. Behind the black reels, where you’ll find images of popular game pieces like the Dog, Car, Ship, Cat and Green Houses, you’ll see the classic Monopoly board game. The Green Houses represent the Wild symbol and will reward you with 20x your stake if you manage to land 5 across a paylines.

What makes this particular video slot a thrill is its Hot Zone. On every spin, Hot Zone Wild patterns will also spin along with the reels. If the Hot Zone Symbols (the Green House or Red Hotel) land on any Hot Zone Wild spaces, they will turn into wild symbols. Plus, the Green House wild symbol on the regular reels may also upgrade to a Red Hotel wild at random.

If the Hot Zone wilds result, the Hotel Upgrade feature will activate and add a random multiplier of up to 5x to all Hot Zone symbols. What’s more, if the Hot Zone House or Hot Zone Hotel land on a Monopoly symbol, they’ll be combined.

The game also has a Free Spins feature, which is triggered when 3 Monopoly symbols result on reels 1, 3 and 5 at the same time. Once activated, this symbol is removed from the reels and you will be awarded with a random number of free spins. If the Green House or Red Hotel symbols land on the reels during the feature, they will lock into place and remain for the rest of the free spins round, boosting the chances for wins.

As for the base game, there are 3 bonus features that can be triggered at random: Chance Card feature, Bonus Selector feature, and Bonus Drop feature. Each one of these features is linked to the Hot Zone and activating any one of them will increase your chances of winning.

Like the other games in the series, Monopoly Bring the House Down is equipped with a Big Bet feature. With this feature, you can get 5 linked spins of the reels. Each spin uses 40 paylines and all accumulative wins are paid at the end of the last spin and are paid according to the awards table. During the Big Bet, you’ll get the chance to pick a certain number of community cards based on the price of the game.

For instance, a 20.00 game will give you 1 pick from the cards while a 50.00 game gives you 4 picks from the community chest cards. With these cards, you could obtain any of these awards: cash value, every spin a win, extra spins, Hotel upgrades up to 5x, Wild and Locked, and symbols eliminated.