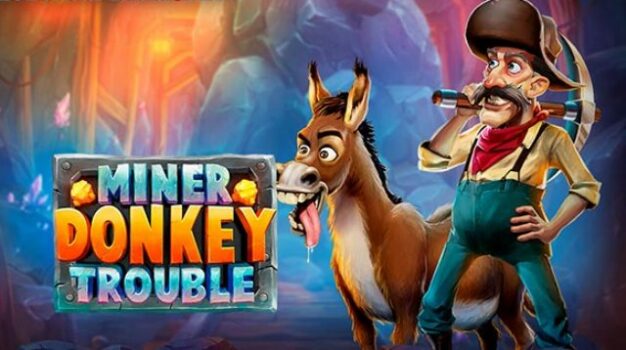 The miner and his trusted donkey, Trouble, have found themselves trapped in an abandoned mine. But, all is not lost. The mine is also home to a treasure trove of hidden gems, and you can get some for yourself!

Miner Donkey Trouble is a madcap cascading 5×7 gridslot with plenty of different features for you to unlock and experience, which one will be your favourite?

Diamond Wilds do not land on the grid but are created by the Pickaxe Wilds, and Dynamite Scatter features. Diamond Wilds substitute for any paying symbol to form winning clusters.

For every winning combination you get on a spin, each symbol will power up a charge and feed the donkey a carrot! There are three levels of charge that you can reach, and each one will affect the grid differently after all cascades are finished on a spin.

Donkey Destruction 1: Removes the least valuable symbols from the grid

Donkey Destruction 2: Removes all but special symbols from the grid

Donkey Destruction 3: Removes all but special symbols form the grid and guarantees golden nuggets in the cascade.

When the Miner’s Pickaxe lands on the reels, it will activate the Pickaxe Wild feature. After all cascades, charge meter effects and Dynamite Scatters are played out, the feature begins. The Pickaxe will randomly generate a number between 4 and 10, and that many Diamond Wilds will be added onto the grid.

On any non-winning spin, the Random Mega Symbol feature can be triggered. When this happens, a 2×2, 3×3 or 4×4 mega symbol will be added to the grid. Any symbol (excluding special symbols) will be chosen to be the mega symbol, and more than one can be placed on the grid simultaneously (though they will always be identical).

You trigger Dynamite Explosion when the Dynamite Scatter symbol lands on the grid. Once all winning combo values have been banked, then the explosion begins!

The Dynamite will explode blowing any surrounding symbols off of the grid (excluding special symbols), and diamond Wilds will then be placed around the area next to where the Dynamite went off.

All features are still active during free spins, and landing three more Dynamite Scatters will trigger another five free spins, up to 20.

Are you ready to unearth some big wins? Give it a go with Miner Donkey Trouble.