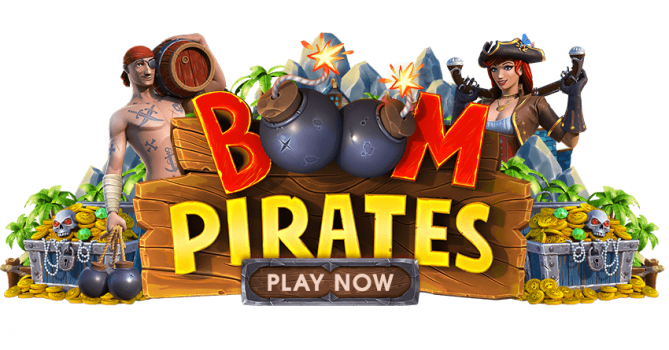 Microgaming is setting sail for adventure in Boom Pirates, the latest online slot created by Foxium exclusively for Microgaming.

Amid stunning artwork and animations, Captain Mary hoists the Jolly Roger with her band of pirates in this dynamic slot packed with a shipload of treasures, which include the all-new Wonderways™ and Foxify™ features.

Pillage the wealth of the seven seas with the Boom Pirates feature powered by Wonderways, during which cannon fire transforms the five-by-four reel grid into an astonishing nine-by-six reels, offering over 10 million ways to win.

Players can activate Foxify to increase their chances of triggering the game’s three treasured features; raising the initial wager by 50% will add extra gunpowder to the pirates’ cannons, boosting the chance of a grid explosion.

The fearless Captain Mary features prominently throughout the game, randomly swinging into action to turn non-winning spins into a five-of-a-kind winning combination.

Captain Mary also leads the pirates in an uproarious chant while YO-HO-HO scatter symbols land on reels one, three and five. Finding all three symbols will activate free spins, taking players on a mysterious treasure hunt. When the Boom Pirates cannon is fired, activated Wonderways remain open for the duration of the free spins. This combined with the fact that any three scatters landing offer an additional five free spins, provides the potential for huge rewards.

Players can also choose to purchase free spins for the pirates’ price of 100x the initial bet. The compelling buy-in feature lets buccaneers rummage the bounty of free spins at any time they choose during the game.

All aboard and get ready for an explosive experience in Boom Pirates, now available exclusively to Microgaming operators.

James Buchanan, Director of Global Operations at Microgaming, comments: “Boom Pirates is full to the brim with thrilling features, new mechanics and a soundtrack of sea shanties not to be missed. Captain Mary takes players on an exciting adventure as they navigate the game’s cannon fire, swashbuckling pirates and quests for treasure. The Boom Pirates feature expands the reels to an astounding nine-by-six grid with over ten million ways to win, offering players the potential for substantial rewards.”

Åke André, CEO of Foxium, adds: “Boom Pirates is set to be an explosive success and marks the maiden voyage of our new Foxify and Wonderways technologies, which we believe will transform the player experience and enable our creative teams to take game development to the next level.”

Since 2015, Foxium has been raising expectations for storytelling in slot games. From its studio in Tallinn, Estonia, Foxium’s creative experts mix compelling themes and captivating narratives with innovative gameplay mechanics and 3D graphics. The result? Games with an unmistakable signature. Games that outfox the ordinary.