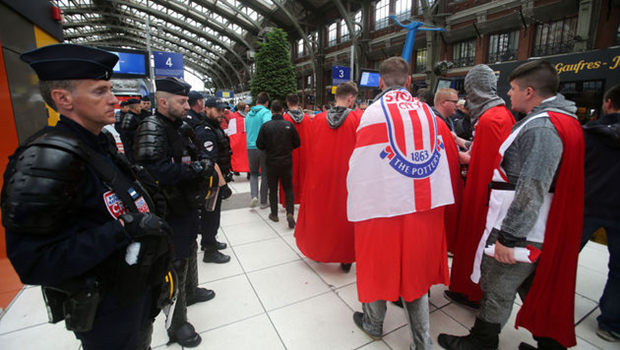 Mess between football fans in Lille

Everyone knows that the UEFA championship has started in France and fans from different places are in France now. Therefore the authorities in Lille have made certain rules and regulations in order to avoid any trouble.

According to that, alcohol sales are banned and the timing of the bars as well as restaurants has been changed. But the fans who visited Lille for the tournament are searching for alcohol and many of them are protested against the prohibition of alcohol.

Therefore Lille was like a battlefield. Many of the individuals are fighting against the restaurant and bar owners and they are throwing chairs and tables in the street and created a big mess.

As the problem gets severe, the shop owners informed police and number of officers have come to the place immediately. Initially they warned the people over there and asked them to leave the place.

But they were not listening to the police commands and doing the same continuously. Then the police officers take charge and targeted the people who are creating mess. In fact, they have arrested many people.

After cleared all the people out there, a police officer has given a warning to the football fans in Lille. When a reporter asked him about the mess he said “The police officers are ready to fight against the violence. They will warn the people only once if they do not respond to the warning then severe action will be taken”

The reporters also asked him about the prohibition of alcohol and he replied “the main intention behind this prohibition is to avoid unwanted troubles between the fans. People from different places will definitely create mess if they consume alcohol. This is the reason why the authorities banned alcohol in the location”

It is estimated that around 10000 football fans from Slovakia, Russia and etc have visited Lille presently. Therefore it will definitely be a big trouble for the police officers to control all of them and make sure there is no problem between them.

The senior police officer also said “we can understand that it is like a huge fiesta for the football fans but they must know their limits and how to behave in the new place. Otherwise they will have to face the consequences”

So far 2500 security guards, police officers and soldiers are in the duty in Lille and they will stay there for the upcoming days to avoid the mess between football fans.

Similar to the protest against alcohol prohibition, the Russian fans have created a mess in the stadium and as the result, the Russian team has been warned and the authorities said “if the Russian fans disturb the matches anymore, the team will be disqualified from the tournament”